Skip to content
Travel Tips A Guide To Hiking in Italy

At Walks of Italy we are all about exploring on foot! And with some of the best and most diverse landscape in Europe, hiking in Italy is one of the best ways to really see the land, meet the people and – quite literally – get off the beaten path. You can find breathtaking hikes in Italy from the Alps to the Appenines, the coastline to the islands. Don’t know where to start? Here are four (plus some!) of our favorite, slightly lesser known hikes in Italy.

Cinque Terre is not the only hiking in Italy (like we’ve mentioned here) and it’s definitely not the only hiking in Liguria! You’ll find some of the best views of the coast along the trails of the Parco Naturale Regionale di Portofino, a large park that protects the Ligurian coastline and the extensive network of paths.
San Fruttuoso, the tiny town famous for the underwater statue of Jesus directly off of the small beach’s coast, the Christ of the Abyss, is only accessible by foot or ferry, but of course we suggest the hike! Take a ferry to Portofino then follow the trail the roughly two hours to San Fruttuoso. There you can reward your hard work with a swim, a gelato or a mozzarella, tomato and pesto sandwich!

The greenway follows the beautiful lake for about six miles between Colonno and Cadenabbia. Though it’s not particularly challenging – most of the walk is flat – you can choose to do small stretches of it between cities. Try the path from Lenno to Tremezzo, about 1.5 hours and admire the olive trees, sail boats and enormous villas reminiscent of ancient Roman rule, easier to imagine as you walk the path that follows traces of the Antica Strada Regina, the antique connection road built by the Romans.

Majella National Park will open your eyes to the too-often ignored Apennines, the Alps smaller sister, not to mention some of the last true wilderness left in Italy. This relatively young park (it was established in 1998 to protect the wilderness area) is nearly 100 square miles of some of the Apennines most impervious mountains and canyons to trek through. If you’re feeling motivated go for the Monte Amaro, the second highest peak in the Apennines at 2,793 meters!

Though not often considered, volcanoes make great hiking destinations! Italy has four main ones to choose from: Vesuvius, Stromboli, Vulcano and Etna. Tour all four in one whirlwind hiking vacation (it’s possible) or choose just one to focus on, each is completely unique in level and landscape.
Mount Vesuvius, near Pompeii and just six miles east of Naples, is a relatively easy climb at about 4,200 feet, rewarding you with an amazing view over Naples Bay. It takes about 30 minutes, making it the shortest of the four volcano hikes.
With a ferry to the island of Stromboli (3,030 feet) you can check out the Stromboli volcano on the Sciara del Fuoco hike, a much more demanding hike than the breeze of Vesuvius. It takes about two and a half or three hours. You’ll also have to go with a guide but once at the top you can take in the volcano’s activity (usually about every 15 minutes), the view and the immense craters.
From Stromboli you can head to Vulcano Island, aptly named after the Volcano that formed it, also called Vulcano. This 1,640-foot volcano is often ignored but perhaps the most scene-setting of them all, a very steep forty-five minute hike is accompanied with the smell of sulfur and the constant steam and other gasses that continually shoot into the air. After this difficult hike, soak in one of the many thermal baths on the island – a natural benefit to hiking a volcano!
If you’re looking for something a bit tougher go straight to Sicily to tackle Etna, the highest volcano in Italy. The volcano tops off at 11,000 feet, similar to the peaks of the Alps, though hikers are only allowed until 9,500 feet since the explosions. Nevertheless Etna’s volcanic activity is already visible from about 6500 feet up at the Crateri Silvestri. Though you can get to the two craters by bus, try using it as the starting point in your walk for a first glimpse of Etna’s volcanic activity. The entire Etna trek takes at least six hours, though it can be done with a mix of bus, cable car and walking instead.
Whether you’re hiking or visiting incredible cities in Italy, we want to help you experience it like a local. Check out our full offering of blogs and walking tours guaranteed to help you get so much more out of your travels in Italy. 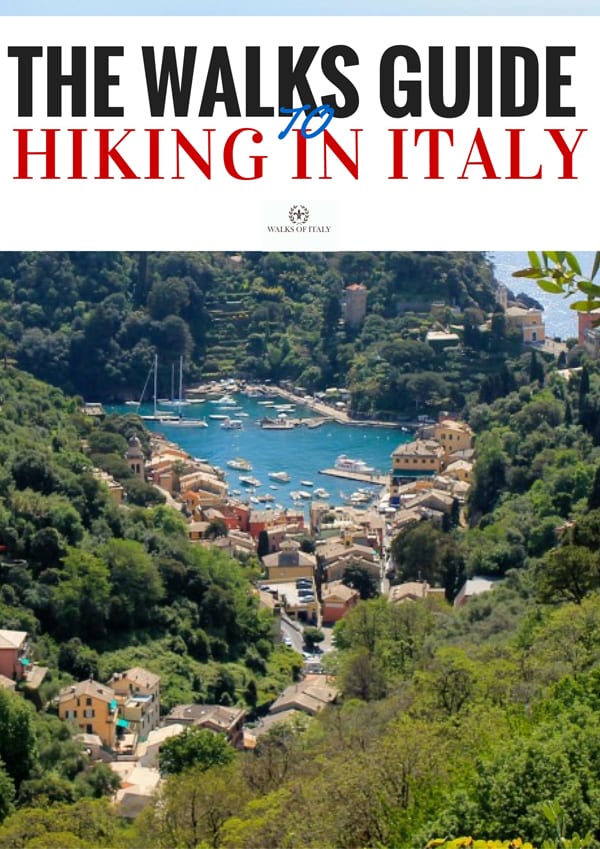 2 thoughts on “A Guide To Hiking in Italy”