Editors’ Note: We like to think that the guides we work with know Rome better than anyone else in the business so when we heard that teacher, author, and Walks Colosseum guide, Mauro Poma had written a new book on the history and lore behind the Colosseum we had get him in to write a guest post. His new book,  Discovering the Colosseum is required reading for anyone who wants to know more about one of the most iconic buildings of the ancient world: the shows, the gladiators, the animals used, the curiosities, and more. If you like what you read here, you can pick up a copy of Discovering the Colosseum over at Amazon.com. We’ve just finished our advanced copy and it’s the perfect read for anyone who plans to see the Colosseum with us on their next trip to Rome.
The Roman Colosseum, AKA the Flavian Amphitheatre is one of the most famous ancient monuments in the world and attracts roughly 6 million visitors every year. Despite its popularity, many misconceptions still surround it. While researching Discovering the Colosseum I dug deep into many of the facts about the Roman Colosseum and found that, in some cases, hundreds of years of popular myth, hearsay, rumors, and of course Hollywood movies, had hidden the actual truth. Here are the 5 biggest misconceptions that I encountered while researching my book and the truths behind them:

1. If the Emperor wanted to deny mercy to a wounded gladiator after a fight he would give the “thumbs down” signal.

We’ve probably seen this Roman colosseum fact in every movie about the spectacles that took place in the historic building. The gesture was immortalized in Jean-León Gérome’s 19th century painting Pollice Verso which is what the ancient Roman’s called the gesture, literally “with a thumb turned”. The problem is that it’s never been clear how turned the thumb was. In reality, Romans probably indicated the denial of mercy by placing their thumbs horizontally to symbolize a sword cutting the throat of the defeated gladiator. At the same time they shouted “Iugula! Iugula!” meaning “Throat! Throat!”. In this case, the gladiator bowed and waited for the blow to the nape or throat. Normally, those who had to die did not remove their helmets, so that the opponent was not forced to see their last look. This habit was a consequence of the fact that many gladiators trained together and some of them were certainly friends: imagine if one fine day you had to fight a friend or, even worse, kill him…

2. All gladiator matches ended with the emperor ordering someone’s death.

Contrary to this “fact” about the Colosseum, the probability of exiting from the arena alive – at least in the Republican era and in the first imperial age – was not low. There were more risks of dying from deep wounds or cowardice (which could enrage the audience, who would consequently ask for the gladiator to be killed) than by being denied mercy. In late imperial times forgiveness actually became commonplace.

3. Christians were routinely killed in the Colosseum.

This Roman Colosseum fact is tricky because it’s true, but not for the reason you might think: Believe it or not, we still have no clear evidence that Christians were executed inside Rome’s Colosseum for being Christian. Undoubtedly, some Christians were killed in the Colosseum, but as far as we can tell right now, their religion was incidental and they were simply part of the normal spectacles. Roman history has the annoying habit of changing as new discoveries are made, but for right now the evidence just does not support the sort of mass Christian martyrs that popular culture has made commonplace in people’s imaginations. We do, however, know that Christians were killed in other places like the private circus of Nero situated not far from the present-day Basilica of St. Peter. We also know what Christians thought of the blood sports – interestingly, they did not feel compassion for the gladiators killing each other. They thought instead that it was the public who suffered the most moral and spiritual damage from attending such violent spectacle; a belief surprisingly close to that of the pagan writers. Only later did Christians begin to feel compassion for those actually fighting in the arena.

4. The Colosseum only hosted gladiator duels.

We know this Colosseum fact is completely false. The program of the games in the Colosseum was pretty multi-faceted, as far as blood sports go. It included a series of shows and performances that lasted several hours. They began with a presentation of all the “stars” of the day. The morning program then continued with fights between animals, followed by circus performances, and ended with hunting games. Around noon, during the lunch break, death sentences or public executions of criminals were staged. Public executions had a dual purpose: to warn the people of the consequences of breaking strict Roman law and to “fill” the lunch break by exploiting these men as human merchandise to be sacrificed for the pleasure of the spectators. The afternoon would continue with the long-awaited confrontations between gladiators.

5. Lions and Tigers were the main animals employed the hunting games hosted in the Colosseum. 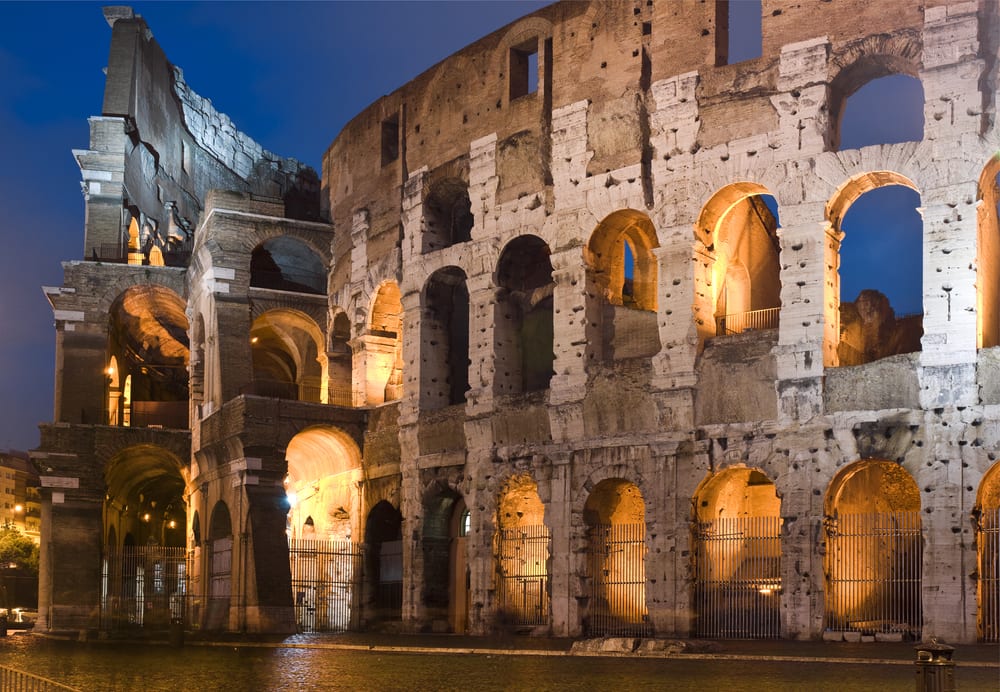 In the movies you only see lions and tigers but the truth is that, on top of the big cats, ancient Romans killed entire menageries of animals. From the historical records we know that there were also rhinos, hippos, crocodiles, giraffes, elephants, gazelles, antelopes, jackals, ostriches, hyenas, cheetahs, panthers, bears, and leopards as well as donkeys, camels, horses, rabbits, deer, boars, and wolves, to name a few. Where did the Romans find all of these animals? Crocodiles, rhinos, hippos, and giraffes came from southern Egypt. Gazelles, antelopes, jackals, ostriches, hyenas, lions, cheetahs, panthers, and elephants came from North Africa. The bears were mostly from the Atlas Mountains in Morocco. Italy and other European countries provided all the herbivores, such as hares, roe deer, deer, wild pigs, and donkeys, as well as bears, bison, bulls, wolves, and moose.
One of the exciting, but also difficult parts of writing about the Colosseum is that we are always learning new things about it. When you visit don’t forget that every single stone can tell you so many stories…and if even one of them could talk, you would be overwhelmed by the history of this amazing place.
Post courtesy of Mauro Poma – If you want to read more you can buy a copy of Discovering the Colosseum in paper or kindle over at Amazon.com. And if you’re planning to visit Italy soon, don’t forget to check out our walking tours in Rome.

5 thoughts on “5 Roman Colosseum Facts That Are Probably False”