Florence is chock full of Italy’s finest Renaissance art, history and architecture. It’s a must-see for visitors to Italy and one of the world’s most famous cultural cities. But rising above all these masterpieces, both literally, and some would argue figuratively, is the colossal Florence Duomo. The enormous red-tiled dome – the biggest brick and mortar dome in the world, is both a product and a symbol of the incredibly fecund creative culture that has defined the city for over 500 years.
Florence began construction on its magnificent cathedral in the 13th century, long before the Renaissance began, but nearly a century later, on the verge of completion, the men in charge of building it were forced to admit they had a big problem in the form of a nearly 150 foot, oval hole in the roof where the Florence Duomo was supposed to go. The problem was that not just any dome could do the job. In order to cover the hole it would need to be the biggest dome built since…well, ever. Not only had a dome of that diameter never been built, no one was exactly sure that it could be built, much less how to go about it.
Today, the dome of Santa Maria del Fiore is so iconic that most know the Cathedral simply as Il Duomo. It’s a staple of Florence’s skyline, and as such, easy to take for granted, but what most people don’t know is that it almost died before it was born. If it wasn’t for a stubborn genius named Filippo Brunelleschi, the hole in the roof of the Florence Cathedral may have still been there today.
Here are 7 incredible facts you probably didn’t know about Brunelleschi’s magnificent dome:

A dome of the size and shape of the Florence Duomo that could support itself without collapsing was thought completely impossible to build before the Renaissance. Though similar structures, like the Pantheon, had been constructed before, the knowledge of how they had been built had been completely lost during the long, dark Middle Ages.
Brunelleschi came up with an incredible (and incredibly complicated to explain) design that featured two domes, one on top of the other, using a special herringbone brick pattern and a system of internal chains that ringed the outer dome like the metal rings on a barrel to help evenly distribute the weight. Up until that point the only option to make such a dome was to using flying buttresses, but the Florentines outright refused them, since their archenemy Milan had used that method on their own dome.
Today, the massive dome is still one of the largest in the entire world. It’s even larger than St. Peter’s dome in the Vatican City.

Yet it was designed by a goldsmith

Brunelleschi was a local boy who had trained as a goldsmith, though, admittedly, he had a much larger reputation. During his apprenticeship he learned not only how to set stones and work with precious metals, but also how to draw, paint and carve. He studied wheels, gears, and weights. He built clocks and learned linear perspective. Along with his good friend, Donatello, he went on a pilgrimage of sorts to Rome and studied the city’s ancient monuments to learn secrets that had been used during the Roman empire but were then long lost to architecture. From boy genius, he grew into a true Renaissance man, fascinated with, and skilled in a range of topics. His huge range of interests all helped him develop the design for the Florence Duomo, even if there wasn’t much gold involved.

Brunelleschi was hotheaded and stubborn, but it may have won him the Florence Duomo project.

Although most of the Florence Cathedral had been built by 1380, the lack of a viable design for the Dome scuppered completion until 1420, when the city’s leaders held a competition to find an engineer who could design the magnificent dome. They wanted it to be enormous to truly represent the grandeur and accomplishments of the city. Not only had a Dome of such scale never been built, it would also have to start atop the cathedral walls 180 feet above the ground and stretch nearly 150 feet across.
Cue Brunelleschi, who had the audacity to claim that he could design the perfect dome while refusing to elaborate on how for fear that competitors would steal his ideas. He claimed he wouldn’t need centering – a wooden skeleton to support the Dome as it was being built, which would have been a huge expense at the time because the wood had to be shipped in from far away – but didn’t explain what he’d substitute it with. He fought with the overseers and was labeled a “buffoon and a babbler” but eventually won the bid anyway. His plan had fired their imaginations.

The administrators assigned his biggest rival as co-superintendent.

In 1420 Brunelleschi was officially named the superintendent of the Duomo project, but the administrators of the project still didn’t completely trust the fiery goldsmith. They assigned Lorenzo Ghiberti, another goldsmith, and Brunelleschi’s arch rival, to be co-superintendent. Ghiberti was a popular and well-respected artist around town but his relationship with Brunelleschi had never quite recovered from when he had beaten Brunelleschi for the commission to cast the bronze doors of the Florence Baptistery in 1401 and. The overseers saw the inclusion of Ghiberti as the perfect way to keep Brunelleschi in line, but the distrust between the two only created more competition and more secrets.

Who may have had him jailed

Ghiberti may have instigated officials to jail Brunelleschi in 1434, about 14 years after the start of the Florence Cathedral Dome project, on a technicality. It seems Brunelleschi was behind on union dues, but that would hardly have been a serious offense for a man of his means. Whatever the case, he was released almost immediately and got the last laugh by watching the Duomo grow nearly one foot per month.

City life revolved around the dome 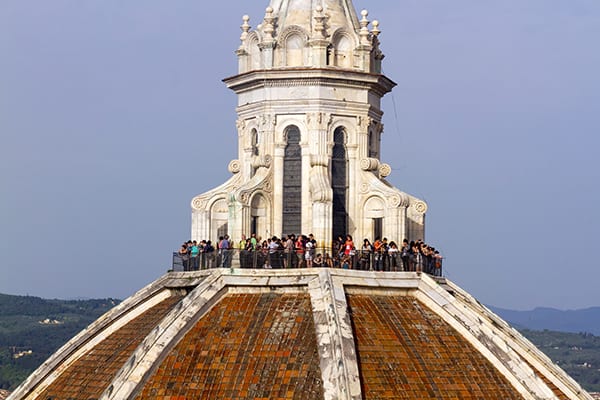 The dome’s construction was such a big deal in the city (remember, the cathedral had sat with a gaping hole in it for decades) that it became a reference point for Florentines. According to National Geographic, “events were predicted to occur and promises were to be kept ‘before the Dome is covered.’” The pressure was on for Brunelleschi and the Florence Cathedral’s overseers. But there was still time for a few side projects. In order to hoist materials up the roof of the dome Brunelleschi actually invented an ox-powered crane capable of lifting and lowering enormous blocks of stone of and bricks. But our favorite Brunelleschi innovation revolves around the story of how he fed his workers. In order to create the large output of bricks needed for the dome Brunelleschi had built a large furnace in the Tuscan town of Impruneta where they are known for the hearty “Peposo” beef stew. Brunelleschi liked this local specialty so much he brought it to Florence and served it to his workers. To this day it remains one of the most iconic dishes in the city, and a must-try when you visit.

The Dome has survived about 600 years, but a visit to the top isn’t for everyone

Today visitors can climb the 463 steps to the tiptop of the dome for sweeping views of the city, but be warned, the Florence Dome climb isn’t for everyone. The stairs were originally built simply to help workers get up and down the cathedral walls for construction and maintenance; no one thought they would to be used by the general public. Not only are there hundreds of steps, but they are small, steep and narrow. Once you reach the start of the dome you can step out onto a narrow walkway to see the beautiful frescoes that line the inside of the cupola but those afraid of heights beware – just a strip of Plexiglas sits between you and the cathedral floor 130 feet below! If you don’t like long hikes, small spaces, or for that matter, heights, try visiting the Florence Duomo Museum, a lesser-known jewel that features wonderful exhibits on the building of the dome, along with the Baptistery’s original bronze doors, and a jaw-dropping reconstruction of the church’s original facade.
The dome has survived wars, storms, and multiple earthquakes. Though frescoes have been retouched, doors polished, and oak supports replaced, Florence’s Duomo has needed very little refurbishment. It’s a testament to the city’s power and wealth and a symbol of the city seen even from afar.