Piazza Navona, one of Rome’s most beautiful piazzas, was not so much built as it was remodeled in the mid-17th century on the site of the old Stadium of Domitian, a horseshoe-shaped arena for foot races built in the 1st century AD. 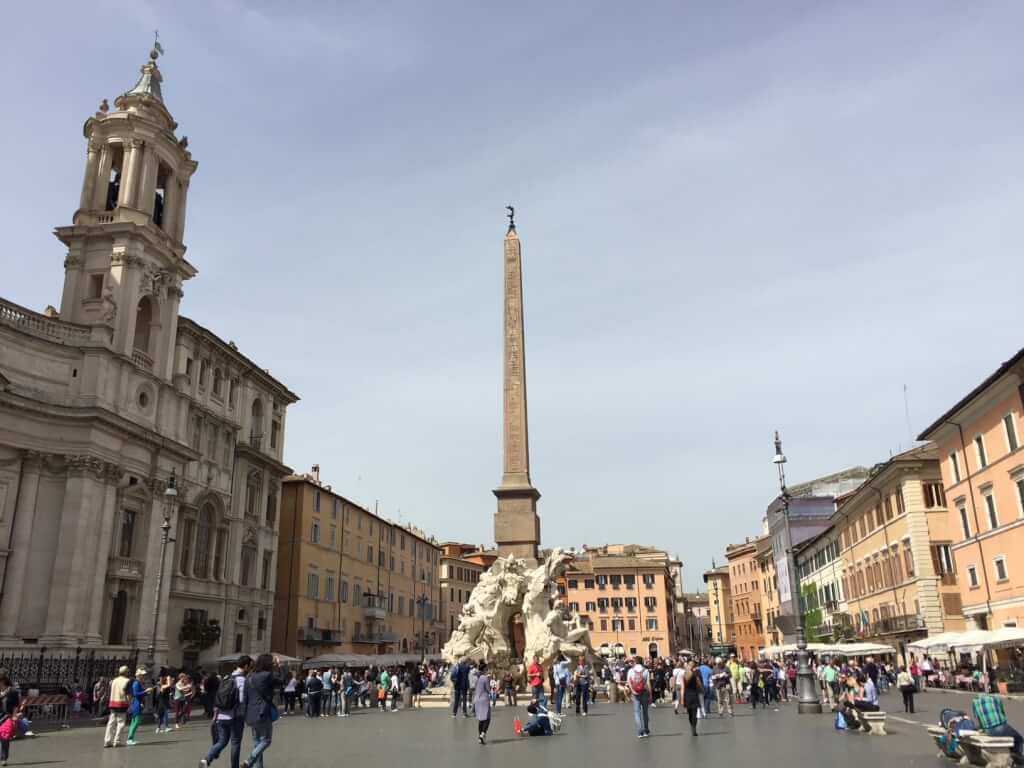 This grand refurbishment, carried out by Pope Innocent X, was basically an effort to to increase the prestige of his family, the Pamphili’s (who owned much of the land around the plaza) by giving them the greatest piazza in all of Rome. Not only did the work include rebuilding the church of Sant’Agnese by Borromini, Bernini, and Girolamo Rainaldi, and the creation of the Pamphili palace, it also was the excuse to build one of the most astonishing fountains ever created, the Fountain of the four Rivers.
With various other fountains, shops, the Museo di Roma, and even a statue of Pasquino, where Romans can leave lyrical complaints about powerful people, it still lives up to its reputation as one of the grandest and most vibrant outdoor spaces in Rome.

What to see in Piazza Navona

The Fountain of the Four Rivers
Bernini’s most famous work was not meant to be his work at all. When Innocent X decided to furnish his great piazza with an even greater fountain, the first sculptor that came to mind was Borromini, who first came up with the four-river concept for the future fountain. 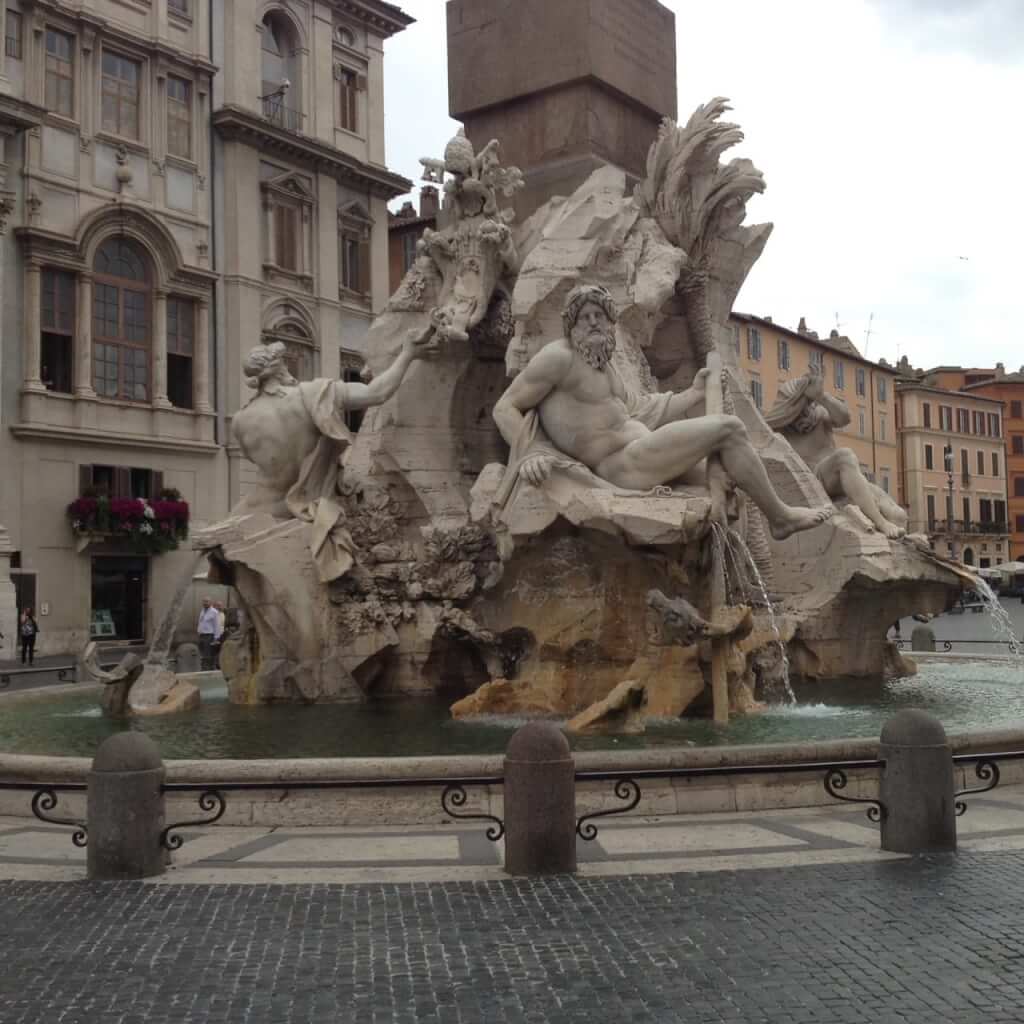 Not only was Bernini the arch rival of Borromini, he was roundly detested by the Pamphili for his connection Pope Urban VIII, Innocent’s predecesor and member of the rival Barberini family. Luckily for Bernini, his friend Prince Niccolo Ludovisi (Bernini was never short on influential friends) caught wind of what was happening and recommended that Bernini make a model of his own concept for the fountain.
With no love lost for Borromini, Bernini took the idea of four rivers and not only did he better the design, he added an Egyptian obelisk to the top, which was a bit like adding frosting to an already-spectacular cake. When it was finished, Prince Ludovisi conspired to have it put into a room in Pamphili palace that Innocent regularly passed through. Upon seeing the model, Innocent X uttered the immortal, if perhaps apocryphal words: “…he who desires not to use Bernini’s designs must take care not to see them.”
The rest, as they say, is history. 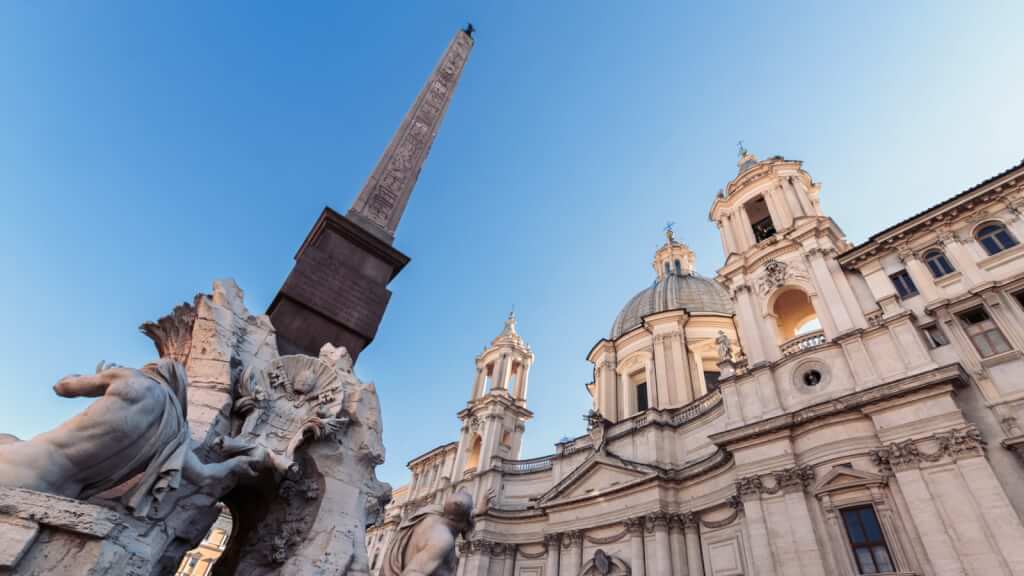 The fountain, which is literally overflowing with allegory, features four titans representing four rivers from the four known (at the time) continents – Africa, America, India, and Europe. Rising form the midst of them, a symbol of eternal Roman power set on a plinth of travertine, is an Egyptian obelisk salvaged from the side of the Appian Way. Adorning it all are an encyclopaedic list of animals, symbols, embellishments and in-jokes that have made the fountain a source of rumor, legend, study and conjecture since it was first built.
Bernini did more project managing than actual carving but he is supposed to have actually carved the horse, lion, palm tree, and the creature that is thought to be an armadillo, but is essentially just made up. The figure of the Nile, which is blindfolded, appears this way apparently because the source of the river was unknown or to avoid looking at the facade of Sant’Agnese, which Borromini worked on. However, the figure of the Danube may, in fact, be holding up his hand to block its view from the same work. 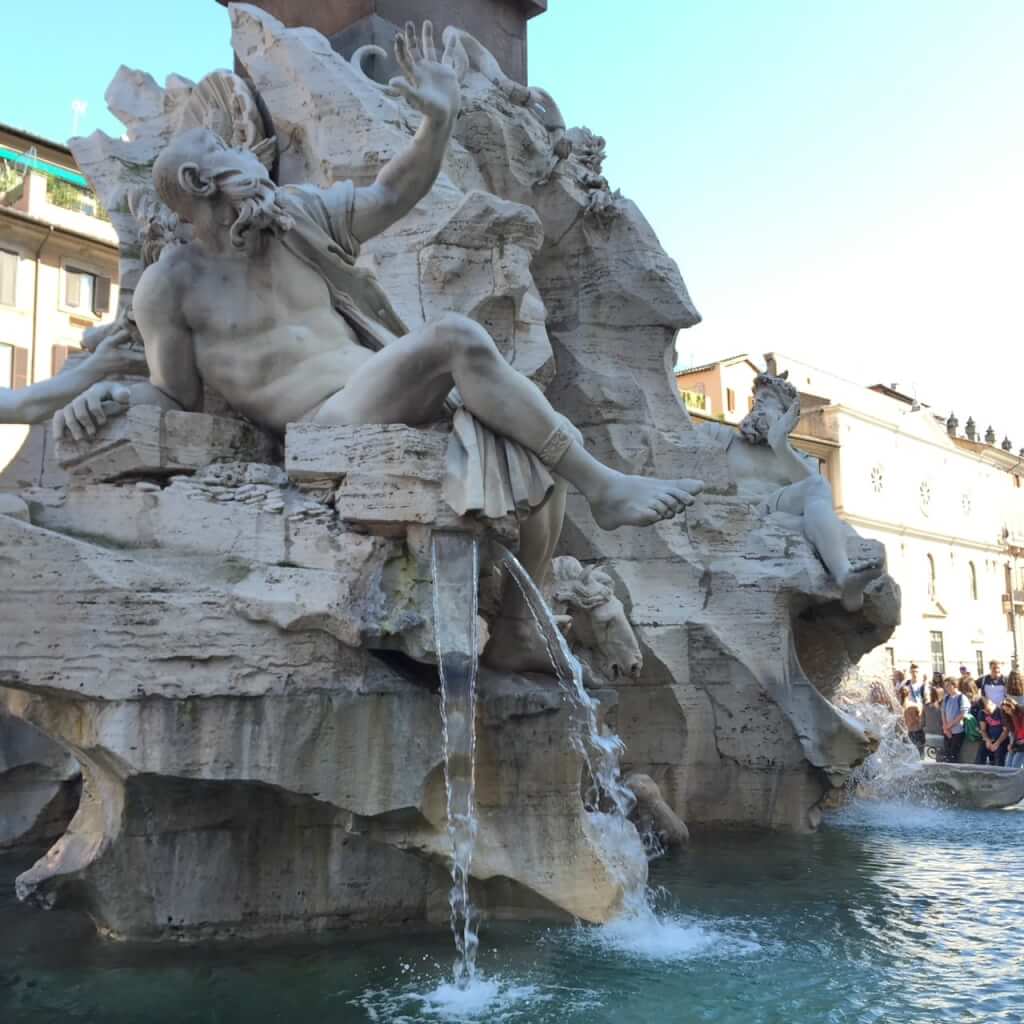 What isn’t in any doubt is the marvel of having balanced a gigantic stone obelisk (weighing multiple tons) on top of a stone arch. It’s a breathtaking feat of engineering and a very sweet icing on an already incredible cake.
Read more: The Genius of Bernini
The Pamphili Palace and Church of Sant’Agnese in Agone
The Pamphili Palace was a collection of buildings abutting the original (unrefurbished) Piazza Navona. When Giambattista Pamphili became Pope Innocent X and undertook the refurbishment of the piazza, he decided to build himself a palace, as well. Under the watchful eye of Rome’s Chief papal architect at the time, Girolamo Rainaldi, a stretch of separate buildings were amalgamated and joined under a single grand facade. Today, somewhat prosaically, the building is the Brazilian embassy. 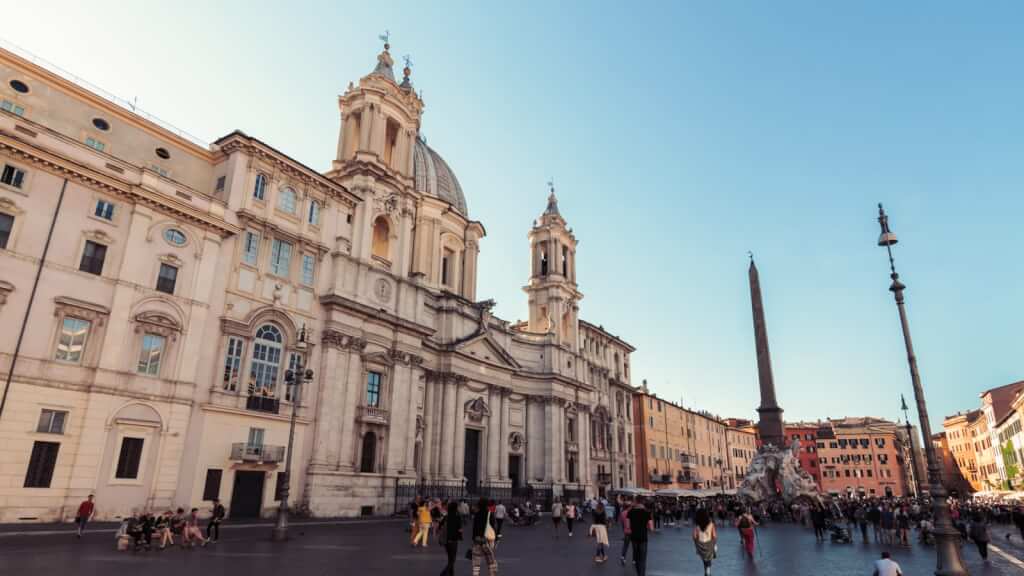 Rainaldi also worked on the rebuilding of the church of Sant’Agnese, which is supposedly built upon the site of a brothel where the young Agnese was dragged after being outed as a Christian in Pagan Rome. Long a pilgrimage site, the Pamphili’s decided that the closest church to their palace needed a bit of sprucing up and so brought in, not only Rainaldi, but also Borromini and finally Bernini, to complete the desired work.
Despite the influence of three of Rome’s greats, historians tend to take a dim view of the building. What is undeniably interesting about it is that you can actually identify the section that each man designed (because apparently cooperation on a single area was out of the question). The facade up to the ceiling belongs to Borromini, the pediment was done by Bernini, and everything above that is the work of Rainaldi. 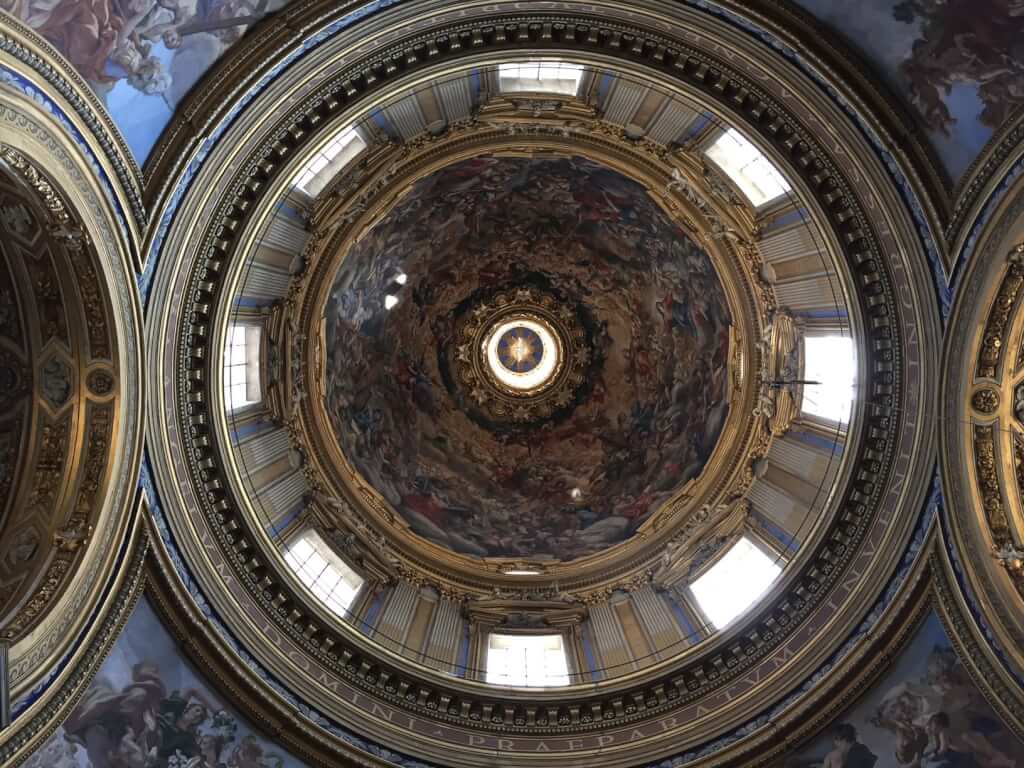 Museo di Roma
This museum, dedicated to the art and history of the eternal city, is relatively new by Roman standards. In came into being in the 1950s when various collections were placed on display in Palazzo Braschi, a 19th century palace that has acted as, mayoral residence, Fascist headquarters, and even refugee center.
Today, it holds a collection of paintings, sculptures and photographs that specifically deal with Rome, its history and its people. It’s open Tuesday through Sunday 10:00am – 7:00pm, with the last entry one hour before the closing time. Tickets cost €11.oo for adults. For more details, please check their website.
The Fountain of Neptune and the Fontana del Moro
These two lesser fountains were built by Giacomo della Porta as a way of “balancing” the piazza. The original designs were not particularly Baroque, but were added over the years to include the requisite gods, cherubs, and stylized sea creatures. 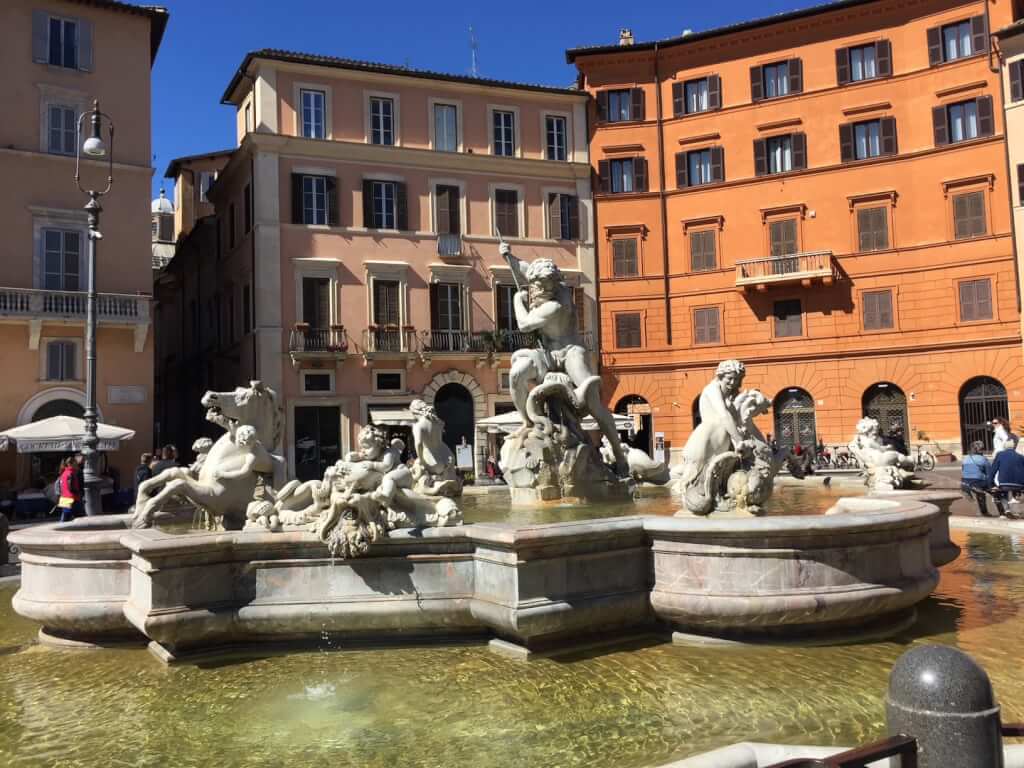 Pasquino
Just off  the southwest end of the piazza sits the first of Rome’s “talking statues,” a.k.a Pasquino. He is a worn and beaten statue from the 3rd century B.C. who was placed in the little piazza in the 16th century.
Not long after this, pieces of paper began to appear on his base denouncing various moves made by the rulers and politicians of the day, often in verse – in effect, making public many of the complaints that people usually only spoke about among themselves. It was a newspaper opinion section before Romans had newspapers and it didn’t take long for it to become extremely popular.
Despite the fact that the original satirist (who is lost to history) was caught and punished pretty horribly (let’s just say writing satirical poems is difficult when you have no hands), the tradition lived on and to this very day, you’ll find  notes stuck to the base of Pasquino’s statue ridiculing anything and everything going on in the city. 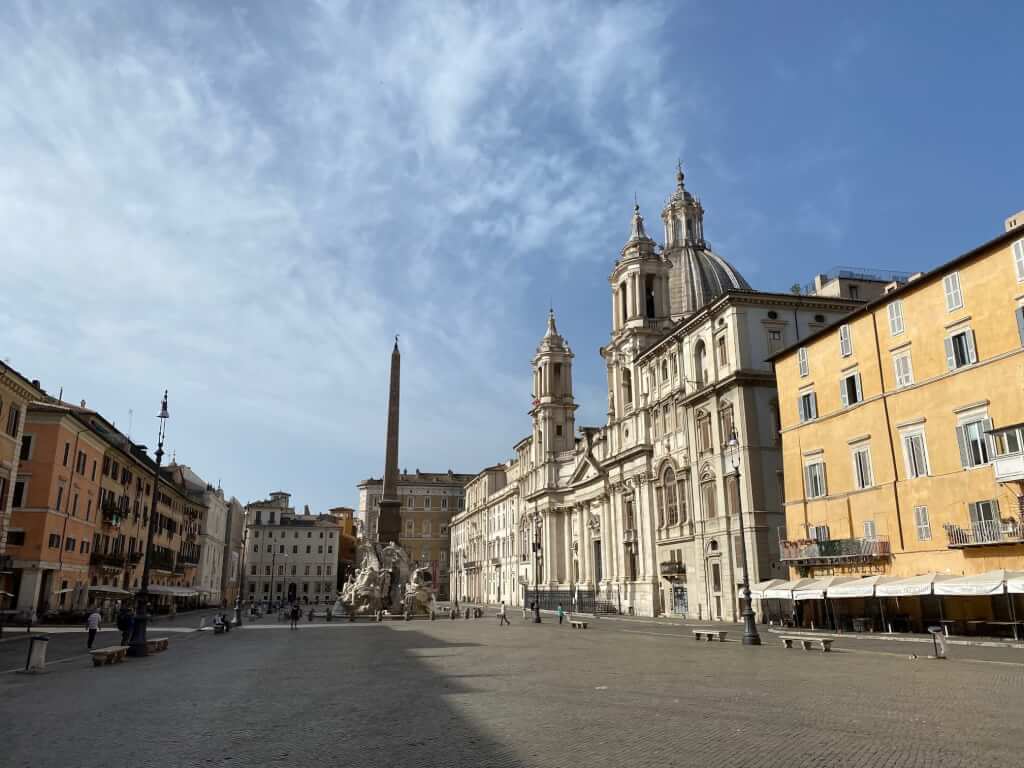 Opening Times
Piazza Navona is a public space and therefore doesn’t close. It does, however, get quite crowded during the day regardless of the time of year, but especially during high season, which is usually from May – September. If you’re looking for a bit of intimacy go in the early morning, before the buskers, hawkers, caricaturists and street artists show up.
But don’t write off the merry bedlam of the piazza later in the day. If you enjoy a carnival-like buzz go around sundown on a summer evening to feel like you have stepped into a heart of a street party that has been going strong for over 500 years.
Rules
Do not jump into the fountains or even attempt to dip your feet into the water. Italian authorities are now clamping down on any kind of interactions with the country’s iconic fountains and offenders could face a hefty fine.
Also keep in mind that many of the restaurants located in the streets surrounding Piazza Navona are more focused on quantity (of covers) than quality (of food). This doesn’t mean that you can’t eat well, you just need to do some research. The golden rule is to try to avoid any restaurant that has a tout outside of it.
Read more: The Dos and Don’ts of Eating in Italy.

The Best Time to Visit

Piazza Navona is one of the perennial draws of Rome. There is a constant buzzing crowd from around 10:00am till well past midnight. Since it was refurbished by Innocent X it has been a gathering spot for people from all over Rome and all walks of life and it continues to be so to this day.
In this sense, the best time to go is when the piazza is at its busiest. However, if you want to see it without the crowds, an early morning walk is just what you need.