Skip to content
Attractions The Trevi Fountain in Rome

The story of the Trevi Fountain, one of Rome’s most famous fountains, starts with a young girl. According to legend, the source of Acqua Vergina aqueduct, which feeds the Trevi, was discovered by a young girl (the titular “virgin”) who later showed it to a group of thirsty Roman soldiers returning to Rome. When Marcus Agrippa caught wind of it, he made it the source of the Acqua Virgo, one of the eleven ancient Roman acqueducts that gave the city the name Regina Aquarum or “Queen of the Waters”. 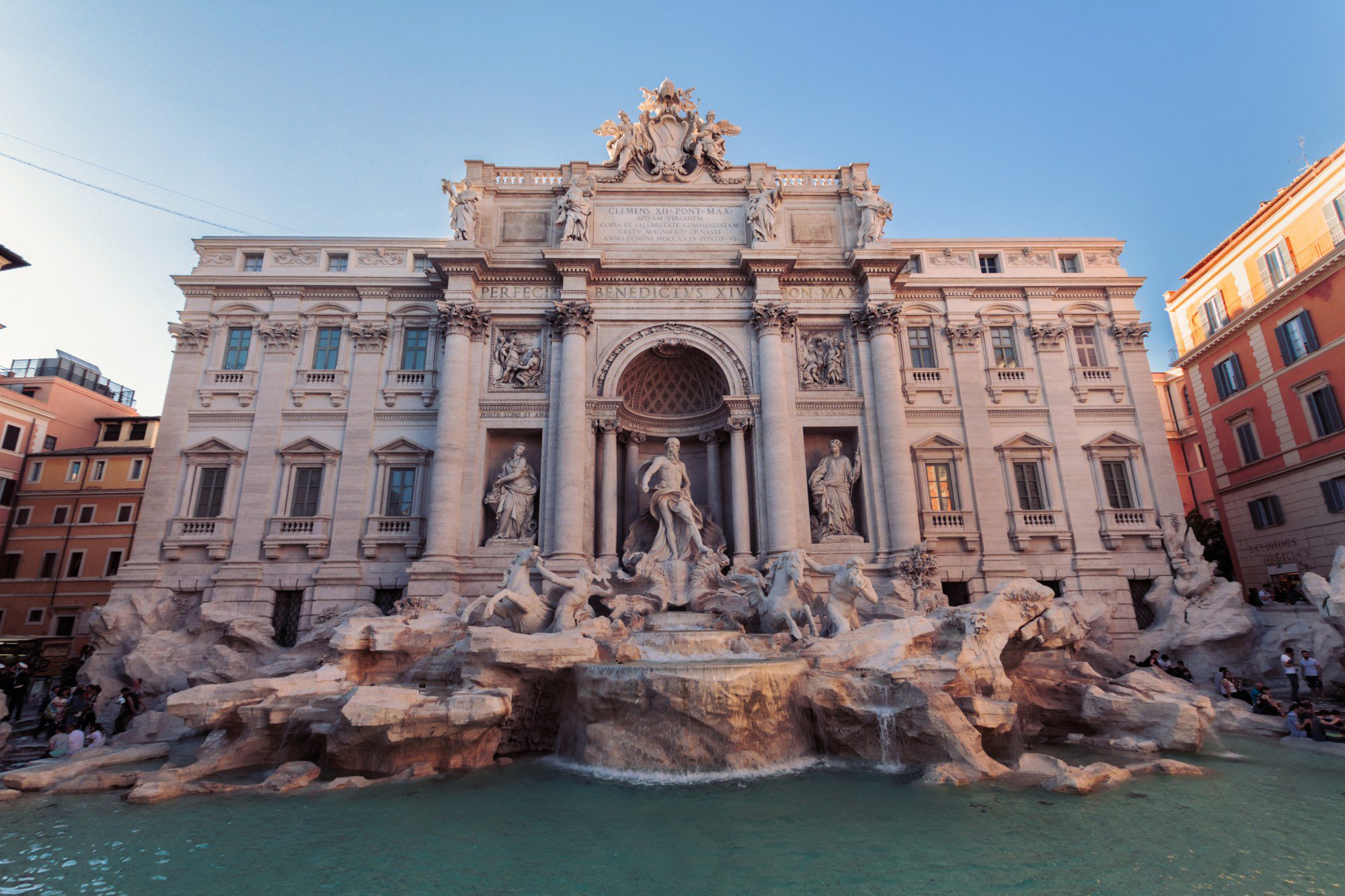 The Acqua Virgo fell into disuse but was rehabilitated (and renamed) into the Acqua Vergina in the Rennaissance. Over 100 years after this architectural marvel had been recommissioned, Pope Urban VIII (who never saw a public work that he couldn’t improve) noticed that the original fountain just wasn’t quite cutting it as the terminus for such a storied source of water.

His successor, Pope Clement XII solved the problem the way Baroque Romans solved all their civic questions, by having a contest. Trouble arrived in the form of a Florentine, Alessandro Galilei, took the top prize, but failed to convince the Roman public, who didn’t want a non-Roman designing a quintessentially Roman fountain. And so, the winner was ignored and building went ahead with the second place contestant, Nicola Salvi’s design.

The fountain took 30 years to complete and was financed with money garnered from the Roman lottery. The end result is a fountain with a variety of influences that, with its imagery, location, and history, is undoubtedly one of the most striking and beautiful in Rome.

If you’d like to learn more about the Trevi Fountain and iconic attractions in Rome, check out our Welcome to Rome: Twilight City Stroll & Gelato-Tasting tour

The central theme of the fountain is Rome’s mastery of water. In the center stands Oceanus, a divine personification of the sea that comes from Classical Antiquity. On his flanks are allegorical representation of Abundance, who spills water from a large earn, and Health or Salubrity, who holds a cup with a snake drinking from it (the snake being a classical symbol of health, as seen on the doctor’s symbol the caduceus). The entire fountain is shaped from Travertine which is the same stone used for the Colosseum. 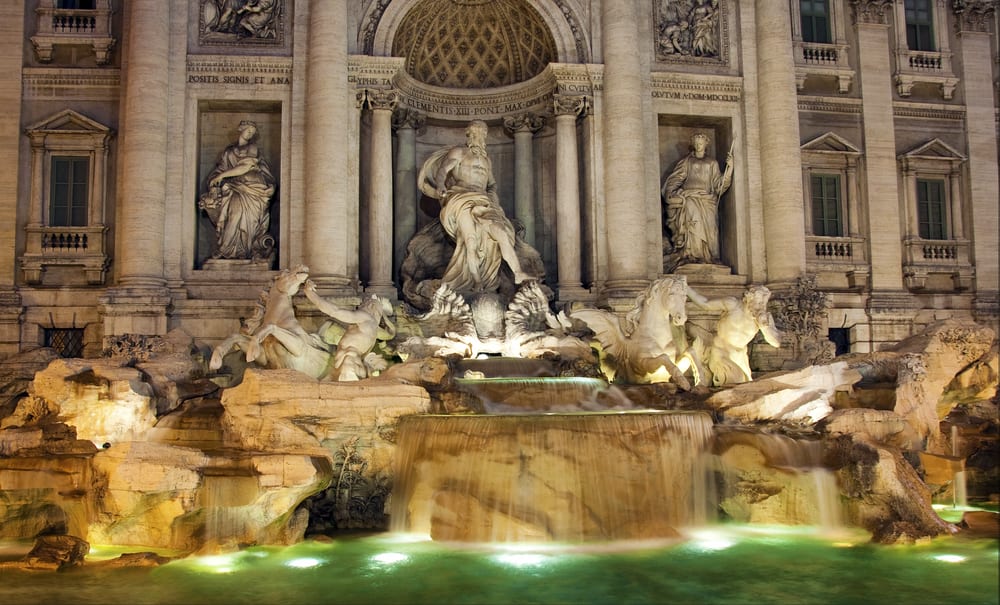 A Coin or Two

Much of the fame of the Trevi Fountain (named after the 3 roads, or tre vie, that intersect there) comes from the traditions that surround it and the movies in which it had appeared, like Three Coins in the Fountain, and Fellini’s immortal La Dolce Vita. The most well-known tradition says that if you face away from the fountain and toss a coin over your shoulder into the water you will return to Rome one day.

Secondary traditions have it that two coins over your shoulder will help you find your true love and three are a downpayment on marriage. A fourth a sometimes appears in the literature says that if you drink a cup of the water from the fountain in the presence of your beloved you will never be able to stop loving him or her. With roughly €3,000 accumulating in the fountain every day (which is dutifully given to charity) we wouldn’t recommend drinking the water, even if it is considered some of the best in Rome.

One of the main reasons that the Trevi Fountain has become so iconic is the role it has played in various movies about the Eternal City. In particular, the 1954 romantic comedy Three Coins in the Fountain, along with its Oscar-winning song of the same name, romanticized the act of the over-the-shoulder coin toss.

Perhaps even more iconic but far less understood is the scene from Felini’s cynical deconstruction of a decadent Rome, La Dolce Vita, in which Anita Ekberg drunkenly wades into the fountain. Finally, who could forget Gregory Peck and Audrey Hepburn stealing a few scenes near the fountain in their immortal romantic comedy Roman Holiday?

Read more: 10 of the Best Movies on Italy

Tips for Visiting the Trevi Fountain 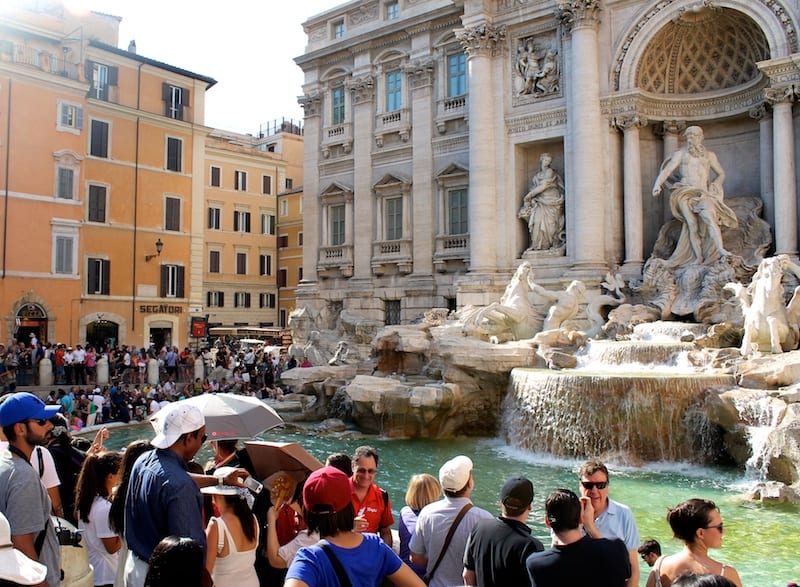 The Trevi fountain is a public work and as such it doesn’t open or close, except for renovation. Because it’s fed by an aqueduct they don’t even turn the water off because it’s powered only by gravity. It was recently closed for the better part of a year while undergoing renovations by the fashion house Fendi but it is now open again and better than ever.

Don’t drink the water. Although the water from the Trevi Fountain comes from one of Rome’s most storied aqueducts, all those coins make it less than palatable. If you want to partake in the old tradition of water drinking with your one and only take a sip from the Fontanina degli Innamorati or “Lovers’ Fountain” that sits in a little nook to the left of the Trevi fountain.

Also, and this goes without saying, wading in the fountain is never allowed, even if you do sometimes feel like you’re stuck in a Federico Fellini flick.

The Best Time to Visit The Trevi Fountain

As the Trevi Fountain is one of Rome’s most iconic sites, it can be crowded. During the high season (May – September), all of the historic centre of Rome is packed with visitors and the fountain is no different.

That said, if you want a little peace and quiet with this iconic site, the only time you will get it is early in the morning. This goes for all of Rome’s most famous monuments but you will be surprised how much of the city you can have to yourself if you are just willing to set your alarm a little bit earlier.