During the second half of November, Rome changes its skin. The sycamores growing on either side of the Tiber River lose all their leaves, the number of rainy and windy days increases, and people start to spend more time inside their homes and cafes than in the charming piazzas.
Before winter officially begins in Rome there is a special date of celebration: December 8th, Immacolata or the Feast of the Immaculate Conception. All around the city, the season of Christmas festivities opens. Christmas trees, nativity scenes, and Christmas lights are set up in the historic center. The same happens in homes all around the city.

In the family, people start discussing where they will spend the crucial days of the holidays: December 24th, 25th, and 26th. It’s a tradition that Christmas Eve dinner and Christmas lunch are spent together with immediate family, allowing the children to celebrate with all of the grandparents. From December 26 to January 6, which is the last day of the holiday, people continue to organize meetings with relatives and friends and take every possible chance to dine together, spending hours at the table. 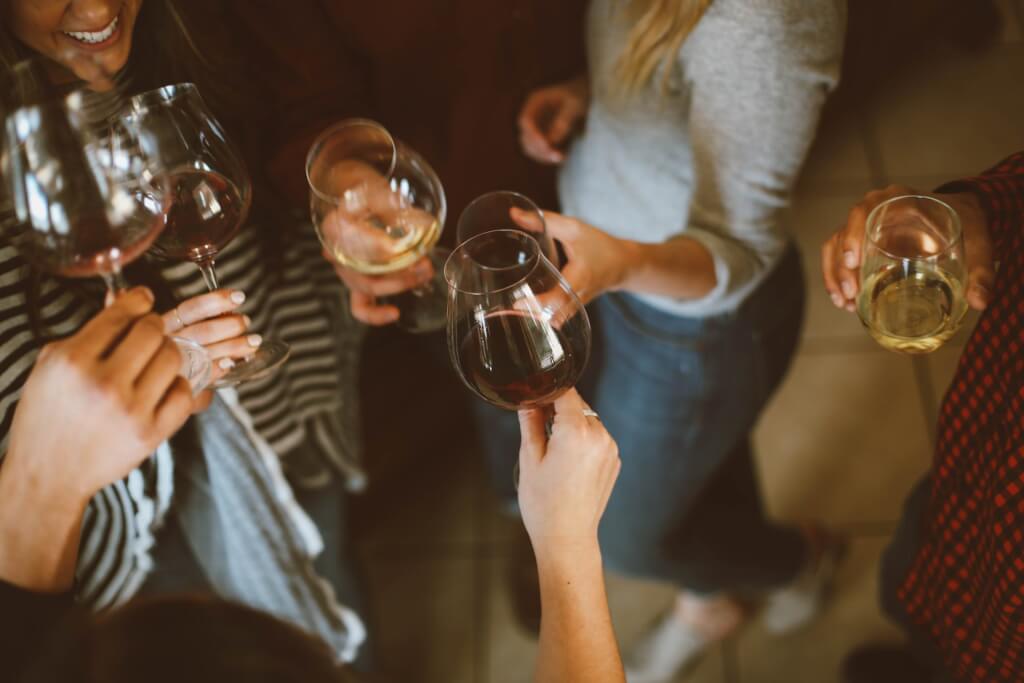 To have an authentic and delicious Roman food experience, try learning how to cooking pasta with a chef on this unique experience, or take an amazing food tour with Devour.

What do Romans eat in Winter?

Due to the lowering of temperatures and the Christmas holiday period, which lasts for almost a month, from December to February the Romans indulge in more elaborate and caloric dishes and in larger portions. The swimsuit test is still far away…

Instead of late afternoon aperitivo with iced Aperol and cold finger foods, people prefer a cup of tea or hot chocolate with cream accompanied by Italian cookies filled with chocolate or marmalade. Although many gelato shops in the historic center of Rome remain open, locals are aiming for warmer, more comforting gluttonous sins like the trapizzino.

The Trapizzino is a street food born in the Testaccio neighborhood of Rome in relatively recent times. In 2008, Stefano Callegari created the first trapizzino in his pizza store in Testaccio. To do so, he used a corner or “pocket” from a tray of “pizza bianca“, a fragrant and tasty flatbread typical of Rome, and filled it with a small portion of pollo alla cacciatora, a local second course of chicken sautéed in a pan with olive oil, garlic, rosemary and sage, and then seasoned with water and vinegar.

Hence the idea of being able to enjoy the tasty dishes of the Roman cuisine in a few succulent bites, without having to sit at a table. With the help of entrepreneur Paul Pansera, Stefano opened six Trapizzino stores in Rome, others in Italy, and even one in New York. Among the most popular varieties are: trapizzino with cuttlefish and peas, trapizzino alla parmigiana, trapizzino with offal and onions, trapizzino with peppers and cod.

Another irresistible selection of delicacies that Romans love to eat in winter are commonly called “fritti“. This is street food that is also served in many restaurants and often goes with pizza.
Supplì, a rice cylinder stuffed with tomato pork ragù and mozzarella and then fried in hot oil, is definitely the most popular fritto in Rome. The locals are also into the baccalà fritto or fried cod fillet: cod is left to soak in water in order to remove excess salt, dipped in flour, and then fried in boiling oil.

In Rome, soups are mainly eaten during the cold season. The most popular soup is minestrone: a medley of fresh vegetables usually found on the market stalls already cut and ready to cook: carrots, potatoes, broccoli, cabbage, chard, spinach. Once at home, many Romans add to the veggies cereals such as barley or spelt and legumes, chickpeas and beans, or even pasta. The soup is then flavored with abundant grated cheese like pecorino or parmesan.
Another soup of the Roman culinary tradition, which now you can find only in a handful of restaurants and during the Christmas Eve dinner is skate broth with Roman cauliflower and pasta.

Winter harvest is generous in the countryside around Rome. Besides Roman cauliflower, with its beautiful spiraling tops, another vegetable that is impossible to find in other seasons is broccolini, also known in Italy as “broccoletto” or “cima di rapa“. Broccolini requires long preparation, therefore it will be easier to taste it in the houses of the locals than in restaurants. The copious leaves of this vegetable are eaten while 3/4 of the stems, the most robust parts, are discarded. In order to keep all the flavor, broccolini must not be boiled but cooked on low heat in a pan with a lid, together with some spoons of water, EVO oil, and two cloves of garlic. This veggie is perfect with second courses of pork.

While many of Rome’s piazzas light up with handicraft markets like Piazza Navona, Piazza di Spagna, and Piazza Mazzini, the people of Rome are already thinking about their Christmas menu. Even if they try to vary a little from year to year, some traditions stay the same. What is certain is that the Christmas Eve dinner menu is fish-based while the Christmas lunch menu is meat-based.

Preparing the Christmas Eve dinner is a big responsibility for the host of the event, usually a mother or grandmother, so it is a good habit to show up even a couple of hours early to help with the arrangements.
The appetizer is hearty and must include a mixture of fried foods: pieces of apple, ricotta cheese, broccoli, cauliflower, and cod are dipped in batter and then fried in hot oil. Then the starters go on with marinated anchovies and eel and a salad of octopus and potatoes.
The first course is a pasta dish such as spaghetti with clams or another type of pasta seasoned with tomato sauce and seafood, such as linguine allo scoglio. If there is a soup, it is often the skate soup with Roman Cauliflower. For second courses the choice is a bit more varied. Among the most common dishes, there are prawns sautéed in a pan with Italian sparkling wine spumante or roasted fish such as sea bream and sea bass with a side of baked potatoes.
When the courses of the meal are finished, people continue eating dried fruit and typical Christmas desserts, playing table games such as Tombola. Panettone and Pandoro, known all over the world and very appreciated in Rome as well, come from other regions of Italy. The typical Christmas cake of Rome is the pangiallo or yellow bread, which has ancient origins. It was in fact offered to the Sun god on the day of the winter solstice by the ancient Romans. Pangiallo is a sweet bread made with dried fruits such as hazelnuts, walnuts, almonds, raisins and figs, honey, and cocoa and colored on the surface with a saffron-based batter. 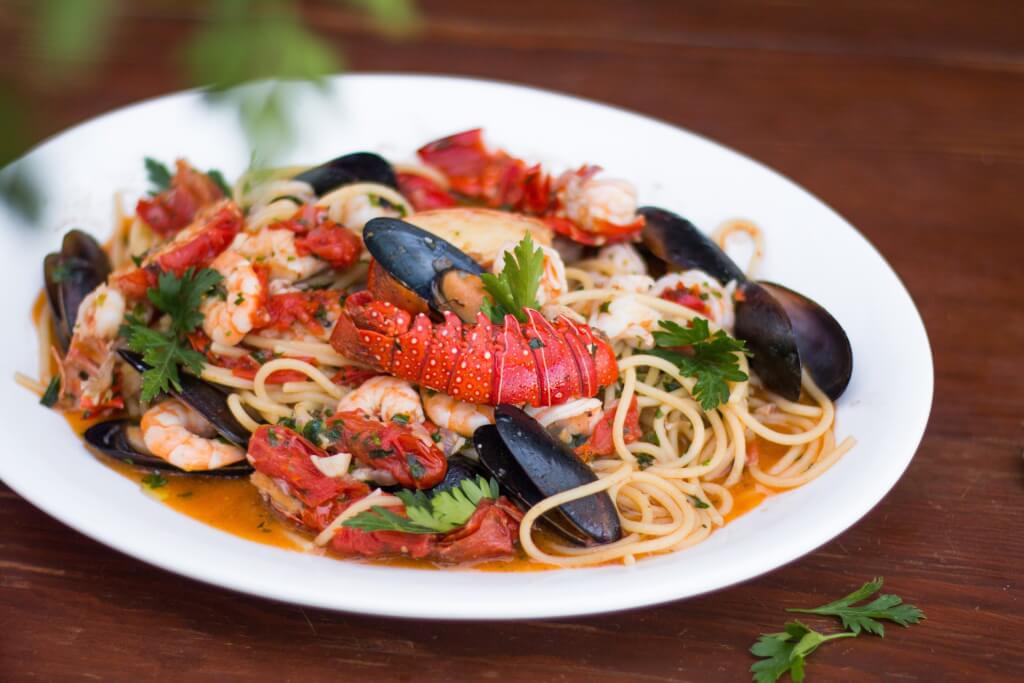 What to eat for Christmas Lunch in Rome

For Christmas lunch, it is traditional to enjoy dishes that are eaten in Rome throughout the winter.  The classic first courses are tortellini in chicken broth and stracciatella. Stracciatella is a typical soup from the peasant cuisine of central Italy. To make stracciatella you first prepare a meat broth (beef or chicken). Then the meat is removed (it is kept to prepare other dishes), a green leafy vegetable such as chard cut into very small pieces is added and the water is brought to a boil again. At this point, you add the eggs beaten with parmesan and pecorino cheese. The eggs will clump together forming “rags” (stracci), this means that the soup is ready.
For the second course Romans love to eat lamb. The most popular dish is lamb chops dipped in beaten egg, breadcrumbs and then fried in hot oil, which is crispy and tasty. More delicate palates will cook the lamb slowly with tomato sauce in a pan like a stew.

You might also enjoy:  How to have an Italian Christmas meal