While this is not your conventional story about Valentine’s Day that’s filled with romance, it’s a fascinating take on a tradition that is widely celebrated on February 14 in many countries around the world.

You are looking at the skull of an ancient Roman Martyr named Valentine which resides in the Rome, in the church of Santa Maria in Cosmedin. Whether or not it’s the skull of the martyr who inspired Valentine’s day is a matter of some debate, to put it mildly. Bound up in this debate is the unexpected history of one of the world’s most curious holidays. 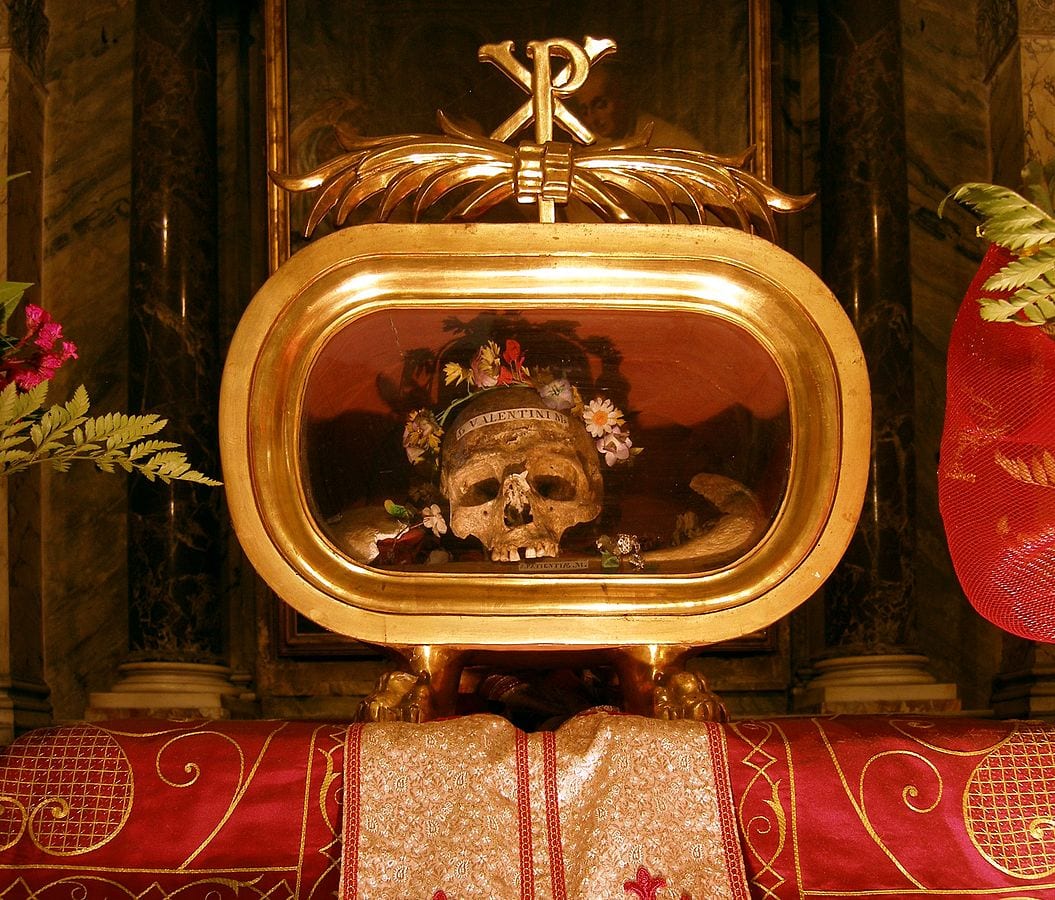 Let’s start from the beginning…who was Saint Valentine?

The better question is ‘who were?’ Depending on who’s counting, there are between 12 and 14 Saint Valentines, including a Spanish hermit and a woman – Valentina. Turns out, it was a pretty common name during Late Antiquity. As far as anyone can tell, the Saint Valentine of Valentine’s Day was one of two guys preaching the good word in Rome in the third century. One of these two was martyred on February 14th 269, thus giving us the date for his eponymous day.

So what did this guy, er, guys, have to do with love and greeting cards, and overpriced restaurants?

Absolutely nothing.  After he was killed, Valentine’s remains sat in the Catacombs of San Valentino for a while before moving to Santa Maria in Cosmedin (or the Basilica of Saint Valentine in Terni, if you support the claim of the other Valentine) where they were visited by pilgrims for many years. They probably would have remained venerated, but somewhat anonymous relics for the patron saint of beekeepers and people suffering from the plague had it not been for Chaucer.

What does an English medieval poet have to do with a Roman martyr?

Geoffrey Chaucer has nothing to do with Roman martyrs but he has a lot to do with English literature and that’s how he created a connection between Saint Valentine and love celebrations. The first written connection between love and Valentine’s Day appears in his poem, Parlement of Foules, written in the late 14th century. He appears to have simply invented the correlation and chalked it up to poetic license, though it’s also possible that he was drawing from older courtly traditions.

So Valentine’s Day is basically a sham invented by a poet in order to make his lines rhyme?

Not exactly. Shortly after Chaucer mentioned love on Valentine’s Day, real-life lovers began to send each other love poems on February 14th. (it’s possible that these predate Chaucer, but we simply don’t know.) To put that another way, people have been writing valentines to their loved ones for over 500 years, so even if there’s no direct connection to a guy who was murdered horribly by ancient Roman pagans, it’s still part of a serious legacy of love.

That’s actually pretty heartwarming. I thought it was just another Hallmark Holiday…

Not so fast. Modern Valentine’s day is very much a product of the various industries that benefit from it – namely, stationery, chocolate, flowers, and jewelry. Every year, billions of dollars are spent on these items, even in countries where Western holidays are frowned upon or outlawed have seen an upsurge in Valentine’s Day gifts in recent years. In Saudi Arabia, where the holiday is illegal, there is a thriving black market for red roses and heart-shaped chocolates in February.
Interestingly in Japan, possibly due to a translation error in an early chocolate ad (the holiday was imported from the United States after the Second World War), women are expected to give chocolate to lovers, boyfriends, and even male co-workers. However, Japan also celebrates a gift-giving tradition on March 14th where they are expected to give white chocolates of equal or greater value to anyone who gave them chocolate in February.

All of this for an old skull sitting in a church in Rome?

Not just any old skull. Relics comprised the backbone of Rome’s original tourism industry which sprung up during the Middle Ages and was based around Christian Pilgrims who came to visit the City’s many churches and holy sites. Relics, in particular, became huge tourist draws because of the miraculous powers they were thought to contain – some of which could be transferred to the faithful who came in contact with them. In our less credulous time, relics have lost some of their ability to draw visitors but they remain impressive, and sometimes macabre additions to many of the churches in Rome.