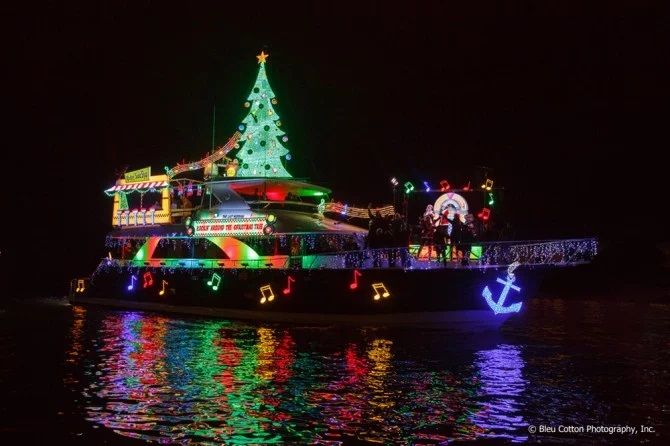 A Dazzling Display in Newport Beach

If you love Christmas lights, Newport Beach is the perfect place to experience them. Newport Beach Christmas Boat Parade – the longest running lighted holiday boat parade in the nation – features as many as 100 boats and thousands of Christmas lights. The boats will dazzle you as they glide by. But the boats aren’t the only shining stars – many of the houses and businesses lining the Newport Harbor – dubbed the “Ring of Lights”- are also decked out in Christmas lights. With its own judged categories and prizes awarded, the “Ring of Lights” has become as celebrated as the boat parade itself.

The theme this year is Deck the Hulls with Bows of Jolly and bringing the jolly on opening night are the first ever parade Grand Marshals – comedic actress Leslie Mann and singer/actor Mark McGrath of Sugar Ray. Leslie and Mark will be adding their own fun personalities to the festivities, that include vessels of all sizes adorned from top to bottom with lights, decorations, moving displays, dancers, music and more!

Conde Nast Traveler has called it one of the World’s Best Christmas Parades and The New York Times says it’s one of the Top Ten Christmas Happenings in the Nation. This is something you don’t want to miss.

Come see Newport Harbor transformed into a shining winter wonderland best viewed from a Hornblower Yacht. We offer a Preview Cruise in advance of the parade so you can see Newport Harbor done up without all of the crowds. We also have Parade Cruises so that you can watch the Parade of Lights from the water. Hornblower’s Parade of Lights Dinner Dance Cruise features a gourmet four-course meal, entertainment, award-winning service and spectacular views of the parade. Everything you need for a fantastic evening – all in one place.