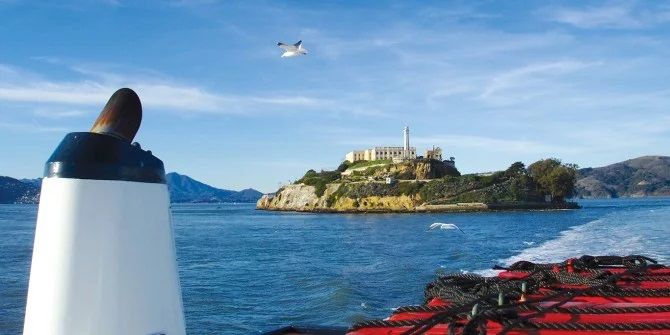 Alcatraz Cruises is nearing the achievement of zero waste status in the year 2015. This accolade is determined by the company’s annual environmental verification and process management results, which are conducted by two international audit and consulting firms.

The company’s 2014 recycling program audit results verified a solid 94% landfill diversion and 6% recycling/compost rate in addition to the marked achievement of reaching 96% landfill diversion and 4% recycling/compost rate during some of the calendar months. The company is on track and striving to reach the achievement of zero waste status by making an instrumental move to 95% and upward for each and every calendar month for the year 2015. The verification audit for the 2015 data is slated for the first quarter of 2016. An integral part of the company’s mission and corporate philosophy, Alcatraz Cruises’ “Respect Our Planet “ program supports the company’s distinction as one of the country’s most conscientious employers because of the commitment to respecting the crew of employees, as well as the natural environment.

According to Alcatraz Cruises’ General Manager & Vice President Scott Thornton, “The ‘Respect Our Planet’ commitment to each and every employee, guest and stakeholder alike states that through our integrated health & safety, quality and environmental management systems, we strive to provide superior service and leave the planet a better place than when we began.”

Alcatraz Cruises’ “Respect Our Planet” initiative fosters an innovative corporate culture where they RESPECT OUR PLANET and will protect and conserve the natural resources and ecosystems on which our business depends. The company is committed to preventing pollution, conserving water and energy, reducing waste and educating guests and employees on environmental stewardship. Alcatraz Cruises seeks opportunities to innovate and partner with stakeholders that support the company’s commitment to the environment as well as vendors with green procurement standards and packaging. The company upholds their Respect Environmental Policy by making sustainability initiatives and advancements in each and every department. The list of the company’s “Green Facts” continues to grow with new initiatives added with regard to increasing energy efficiency, reducing fleet petroleum and consumption, supporting sustainable communities, and promoting environmentally responsible products and technologies.

Alcatraz Cruises holds the high honor and designation of being the first National Park Service Ferry Concessionaire and member of the Passenger Vessel Association to be awarded the triple certified status of ISO Environment-14001, Quality-9001 and OHSAS Health & Safety 18001. The outside auditors recertify the company’s practices against the ISO standards annually as testimony to the improvements and innovations implemented continuously. The company has won numerous awards for these environmental innovations, such as the Business Times Environmental Award for “Small Business Best Practices” and the Workboat Significant Boat Award.

In addition to the progressive corporate philosophy, Alcatraz Cruises launched the Hornblower Hybrid Fleet, which introduced the first hybrid ferry to the United States and San Francisco Bay in 2009. The vessels provide transportation to Alcatraz Island in accordance with their concession contract with the National Park Service. Since that time the remaining two primary vessels in the Alcatraz Cruises fleet have been hybridized, making Alcatraz Cruises the only passenger vessel company in North America with a fleet of hybrid vessels.

According to Terry MacRae, CEO of Hornblower Cruises & Events (the parent company to Alcatraz Cruises), “The Hornblower Hybrid Fleet is an example of our company’s goal of becoming the greenest concessioner in the National Park Service. With this Hornblower Hybrid fleet, we are now being recognized as a model of environmental innovation in San Francisco as well as New York.”

Alcatraz Cruises’ Hybrid Fleet uses power generated by ten‐foot‐tall wind turbines and photovoltaic solar arrays covering the awning on the top decks. That power is converted and stored in battery banks that then power the navigation tools, lighting and other electronics on board the vessels. Excess power is stored in the main propulsion battery banks.

In addition to solar panels and wind turbines, the Hornblower Hybrid Fleet has Tier 2 marine diesel engines. These cleaner, fuel‐efficient engines reduce the amount of diesel fuel used, minimize emissions and significantly reduce the company’s overall carbon footprint. The customized drive system allows the captain to monitor the energy needs of the vessel and select the most efficient power sources. For example, when the boat is idle at the dock, the engines will shut off and the motors will run off of energy stored in the battery banks.

Alcatraz Cruises considered several different designs before selecting this particular system. Of greatest importance, was the need to build a system that maximized the weather patterns on San Francisco Bay. This vessel system has been designed to be modified as technologies are improved and/or refined.

Alcatraz Cruises offers daily round trips to Alcatraz Island as the concessioner of ferry service for the National Park Service. The contract for this service began in September 2006. Alcatraz Landing, the departure and return location, is located at Pier 33 on the Embarcadero, between Bay and Chestnut streets. Tickets can be purchased online at www.alcatrazcruises.com or by calling 415‐981‐ROCK (7625).

Alcatraz Cruises is the National Park Service concessioner of ferry service to Alcatraz Island in San Francisco Bay. Alcatraz Cruises designed, built and operates the first hybrid ferry in the United States, hosting nearly 1.5 million visitors annually. The Hornblower Hybrid’s revolutionary design has reduced fuel consumption by 75% and has already begun to be implemented in other parts of the country. For more information visit: www.alcatrazcruises.com.