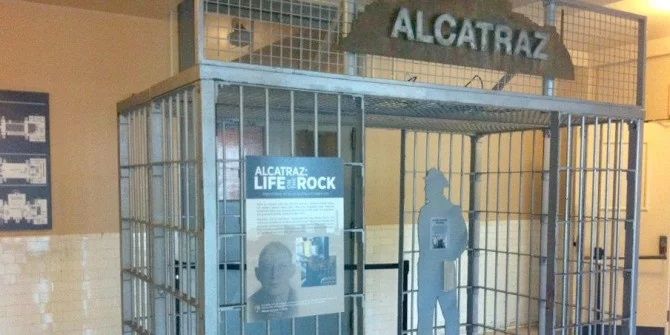 Alcatraz: Life On The Rock Exhibit At Queen Mary

Alcatraz in Long Beach? That’s right…Alcatraz Cruises has just installed “Alcatraz: Life on the Rock” aboard The Queen Mary, which is the new home of the iconic exhibit.

Recently opened, the Alcatraz exhibit will be on display through February 28th, 2017. The exciting, 3,000 square foot display is a great way for families, students and visitors alike to get a real feel for the history of and the fascination with Alcatraz.

The exhibition is two part, one entitled “Alcatraz: Life on the Rock” and the other “Alcatraz: The Last Day.” The Queen Mary has been known to host many compelling and historic exhibits over the years and the Alcatraz display will be on board along-side other shows, which include “Diana: A Royal Exhibition.”

A Little Bit of Background:

“Alcatraz: Life on the Rock” and “Alcatraz: The Last Day”

“Alcatraz: Life on the Rock” is an exhibit that showcases Alcatraz Island’s fascinating history and infamous inmates. Specific installations include “How Do You Know Alcatraz?” which offers a compelling introduction, complete with a model of the island and a look at The Rock’s place in history and movies. Additionally, there are four quadrants that feature the following: a “Military History”; an authentic replica of a prison cell that is the centerpiece of the “Life on the Inside”; “Strength: The Native American Indian Occupation”; and “Preserving the Rock.”

To complement the main exhibit, “Alcatraz: The Last Day” will also be on view. This historic photographic display captures the events that took place on March 21st, 1963 when Alcatraz closed as a Federal Penitentiary. The images were taken by award-winning, Life Magazine photographer Leigh Wiener. While Wiener had a large lay-out in the 1963 issue of Life Magazine, many of Wiener’s 300+ photographs that were captured on that day remained unpublished, filed away in his archive, until they were revealed 45 years later. In 2008, while inventorying his late father’s photographic legacy of nearly half a million proof sheets and negatives, Devik Wiener discovered this treasure trove of images taken on the closing day of Alcatraz. Twenty-five of these images are now on display to complement the exhibit “Alcatraz: Life on the Rock.”

More details about the exhibit:

If you are near Long Beach, check out this special exhibit located on board The Queen Mary at 1126 Queens Highway, Long Beach, CA 90802. For more information, call (877) 342-0738 or visit www.queenmary.com. Or, for more details about “Alcatraz: Life on the Rock,” visit alcatrazcruises.com/exhibit/index.html.