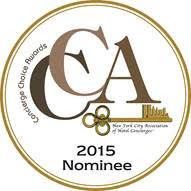 A hotel’s concierge can often be the key to finding the best of what’s on offer to a city’s visitors. And that’s why Hornblower Cruise & Events is thrilled to have been nominated in the Best Sightseeing and Tours category for the 2015 Concierge Choice Awards (CCAs).

The awards recognize those who provide excellent service to New York’s visitors.

A concierge’s reputation is built on their recommendations, they want to make sure they give their guests the best advice and experiences available and, in just a few short years, Hornblower has become recommended by those in the know.

The 2015 Awards were held Monday at Battery Gardens and while we weren’t a winner on the night, Hornblower is thankful to the concierge’s of New York and we’re sure to take the crown next year!

Other category winners include: Something Rotten for best Broadway Show; 9/11 Memorial and Museum for best Cultural Institution; Zuma for New Restaurant and New York Botanical Gardens for best Tourist Attraction.