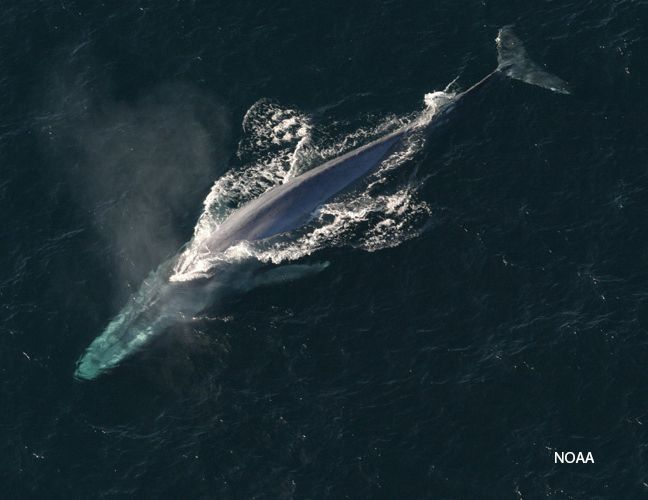 The blue whale a rorqual, a family that also includes the humpback whale, fin whale, Bryde’s whale, sei whale, Omura’s whale, and minke whale. On land an animal the size of a blue whale would be crushed by its own weight without the support of large heavy bones. Because its body is supported by water,  the need for heavy bones  disappeared. This, plus the availability of a large food supply, have made it possible for the blue whale to reach such an enormous size. The blue whale makes deep and rumbling sounds which can be felt as much as heard. These low-frequency sounds travel long distances through water, allowing blue whales to communicate with each other over hundreds of miles of ocean.

A blue whale’s body is long, somewhat tapered, and streamlined, with the head making up less than one-fourth of its total body length. Its rostrum (upper part of the head) is very broad, flat and U-shaped, with a single ridge that extends just forward of the blowholes to the tip of the snout. Its blowholes are contained in a large, raised “splash guard”, and the blow is tall and straight and over 20 feet (6 meters) high. Its body is smooth and relatively free of parasites, but a few barnacles may attach themselves to the edge of the fluke and occasionally to the tips of the flippers and to the dorsal fin. There are 60 to 88 ventral grooves or pleats extending from the lower jaw to near the navel.

LENGTH AND WEIGHT
The blue whale is the largest mammal, possibly the largest animal, to ever inhabit the earth. The longest blue whale ever recorded was a 108-foot (33 m) adult female caught during whaling efforts in Antarctica! In modern times, blue whales in the Southern Hemisphere reach lengths of 90 to 100 feet (27–30 m), but their Northern Hemisphere counterparts are smaller, on average 75 to 89 feet (23 to 27 m). Blue whales can weigh over 100 tons (99,800 kg). Females grow larger than males, the largest weighing more than 150 tons (136,000 kg).

COLOR
The blue whale is blue-gray in color, but often with lighter gray mottling on a darker background (or with darker spots on a lighter background). The underside of its flippers may be a lighter color or white, while the ventral (underside) of the fluke is dark. The blue whale acquires microorganisms called diatoms in the cold waters of the Antarctic and North Pacific and North Atlantic which give the underside of its body a yellowish-green caste. Because of this yellow color, the early whalers gave it the name “sulfur bottom.”

FINS AND FLUKE
The blue whale’s dorsal (top) fin is small and triangular or falcate (curved-back) in shape, and is located three-fourths of the way back on the body. The fin measures only one foot (30 cm) at its highest point though its size and shape are highly variable. Its flippers are tapered and relatively short, about 12% of the total body length and the flukes are broad and triangular with a slight median notch.

The blue whale feeds mostly on small, shrimp-like creatures called krill. During the summer feeding season, the blue whale gorges itself, consuming an astounding 4 tons (3.6 metric tons) or more each day. This means it may eat up to 40 million krill a day. As a baleen whale, it has a series of 260 to 400 fringed overlapping plates hanging from each side of the upper jaw, where teeth might otherwise be located. These plates consist of a fingernail-like material called keratin that frays out into fine hairs on the ends inside the mouth near the tongue. The plates are black and measure about 20 inches (51 cm) in length toward the front of the mouth and about 40 inches (102 cm) at the rear. During feeding, large volumes of water and food can be taken into the mouth because the pleated grooves in the throat expand. As the mouth closes water is expelled through the baleen plates, which trap the food on the inside near the tongue to be swallowed.

Blue whales may be found in all oceans of the world. They migrate to tropical-to-temperate waters during winter months to mate and give birth to calves. They can feed throughout their range, in polar, temperate, or even tropical waters.

Blue whales may be found singly, in pairs or in small groups. They are sometimes seen in larger groups and loosely defined concentrations of a dozen or more have been observed in areas with an extensive abundance of food. They are fast, strong swimmers, capable of reaching 30 mph (48.3 km/hr) when alarmed, but they usually cruise along at about 12 mph (19.3 km/hr).

Because of their enormous size and speed, blue whales were safe from early whalers, who could not pursue them in open boats with hand harpoons. But in 1868 a Norwegian, Sven Foyn, revolutionized the whaling industry with the invention of the exploding harpoon gun and by using steam and diesel powered factory ships and catcher boats. He also perfected the technique of inflating dead whales with air so they wouldn’t sink after being harpooned. The whaling industry began to focus on blue whales after 1900. A single 90-foot blue whale could yield up to 120 barrels of oil, and the blues were killed by the thousands. The slaughter peaked in 1931 when over 29,000 were killed in one season. After that blue whales became so scarce that the whalers turned to other species and, belatedly, the International Whaling Commission (IWC) banned all hunting of blue whales in 1966 and gave them worldwide protection. Recovery has been extremely slow, and only in the last few years have there been signs that their numbers may be increasing. Pre-whaling population estimates were over 350,000 blue whales, but up to 99% of blue whales were killed during whaling efforts. Presently, there are an estimated 5,000 to 10,000 blue whales in the Southern Hemisphere, and only around 3,000 to 4,000 in the Northern Hemisphere.

The annual “Giant Blue Whale Migration” brings hundreds of blue whales each summer to the waters off of San Diego. Giant blue whales were once considered quite rare off southern California, but over the last five years this has changed dramatically with hundreds of blue whales spotted each year. Some Blue Whales have been spotted by our fleet as close as two miles off of Ocean Beach, but the majority of the migration usually takes place off shore about 10 miles from the California coast.

The Adventure Hornblower is the largest Whale Watching boat on the West Coast, with 3 spacious decks, including a vast sun deck on top with great ability to view mammals for miles. Hornblower is proud to have the most experienced Captains at the helm. Our success rate is unparalleled.  We have not only logged  seeing blue whales but we have encountered gray whales, fin whales, humpback whales, minke whales, sperm whales, and occasionally orcas off of the coast of San Diego.  Often during our cruises we are delighted to find playful dolphins, sea lions, and a variety of sea birds during our journey. Book your blue whale watching tour in San Diego with Hornblower today!