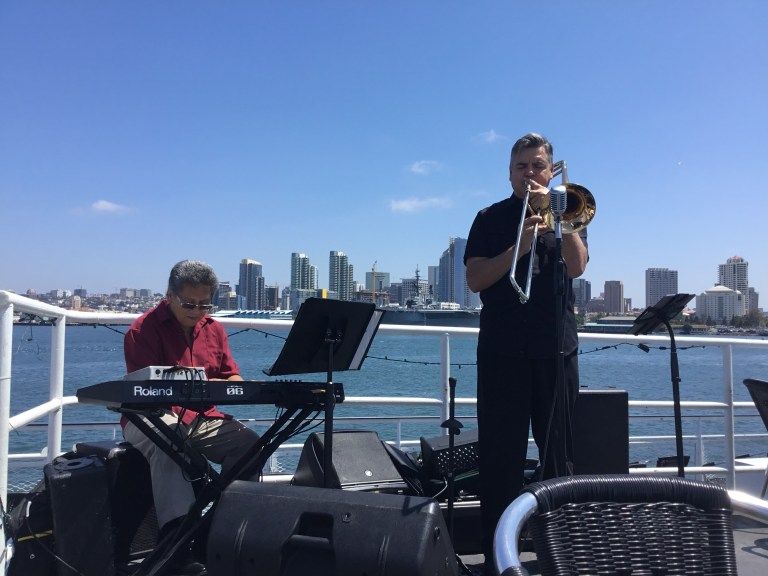 When he’s not telling KUSI-TV viewers about the latest weather blowing through San Diego, Dave Scott is blowing through a trombone to jazz loving audiences. He’s quite the recognized man about town with both his television and live appearances.

Hornblower Cruises & Events is proud to announce that Dave Scott will be on Deck (the sky deck that is) and performing all through summer in San Diego on Hornblower’s Saturday Jazz Brunch Cruises, from May 12th thru Sept. 1st.

Originally from Canada but raised in Hawaii and Southern California, Dave saved his money from a paper route to buy his first trombone and took lessons from legendary Louis Armstrong trombonist, Trummy Young.

“Jazz is tough to make a living at, so, for economic reasons, I eventually found myself as a meteorologist,” says Dave.

After studying at the National Weather Service, he landed his first on-air position with KYMA-TV in Yuma, Arizona as weekday weatherman before returning to San Diego as the weekend weather anchor for KUSI-TV. Dave now holds a Seal of Approval in Broadcast Meteorology from the American Meteorological Society and was an inductee into the NATAS Silver Circle.  In 2017 he celebrated his 25 year anniversary on television.

As an accomplished jazz trombonist and composer, Dave has been the featured soloist at numerous concerts including the San Diego Chamber Orchestra with Jung-Ho Pak and the San Diego Youth Symphony.

He has also had the chance to sing and share some unique musical moments with the likes of Steve Allen, Robert Goulet, Mel Torme, Bill Watrous, Toni Tenille, Ed McMahon, Jimmy Buffet, Carol Channing and even Wayne Newton and CNN’s Larry King. His compositions have been featured on radio and television including KSDS Jazz 88 and KIFM’s Morning Drive Show.

“At fifteen,” he says, “I won a scholarship to study with the Honolulu Symphony Orchestra. I bought all the Urbie Green and Bill Watrous records I could find.

Having started on ukulele, the Grossmont High School graduate spent nine years playing with Fro Brigham, as well as working with Socal locals like