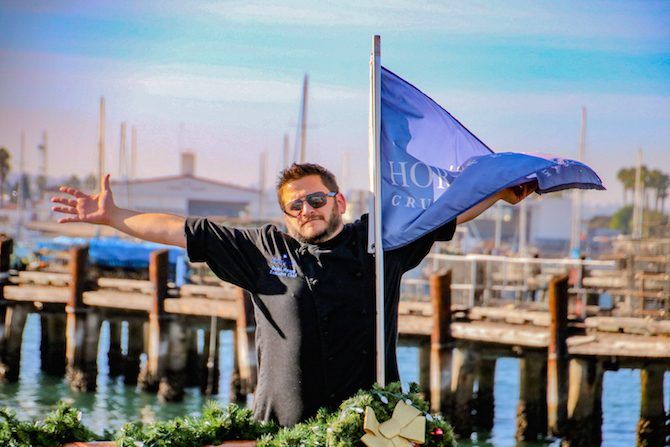 The Boston native graduated from Johnson & Wales with a B.A. in Culinary Arts, and was crowned Boston ChowdaFest Champion just one year later.

He soon accepted a position as Executive Sous Chef at McCormick & Schmick’s in New York City, and worked to cater every SNL afterparty in 2004. Mango cooked for the entire cast of the show, and all the famous guests that appeared.

“Bono eats his dry aged steaks medium-well, which I think is a travesty, but if it makes him happy that’s all that matters!”

He’s popped oysters for Keith Richards until 3 AM. David recalls, “Super nice guy, but I couldn’t understand a word he said!”

David later became Executive Sous Chef at Smith & Wollensky in Boston, where the city’s sports teams became regulars, and made several appearances on live cooking segments for both Fox and NBC.

In 2008, David was guest chef for Hunger At Home in San Diego, which raised money to help feed hungry children. He was also guest chef for The Gingerbread Foundation to raise money for the Epilepsy Foundation at the Fairmont Grand Del Mar.

Most recently, David served as Executive Chef at Union Kitchen & Tap, which was voted best wine bar/bistro in both 2014 and 2015.

So what’s David’s favorite meal to cook for himself?

“I grew up with an enormous Italian family, so I’d have to say it’s a tie between my dad’s meatballs or Osso Buco.”

We’re so proud to have David on board, and can’t wait to see what he serves up!