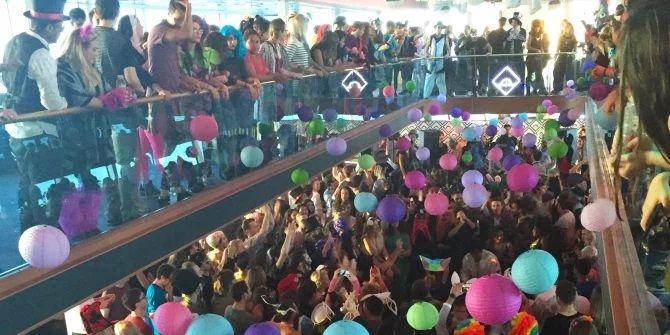 DAYBREAKER JOINS WITH HORNBLOWER FOR A NEW MORNING ROUTINE

It can be an odd experience. On your way to work you pass a group of fresh-faced people, looking like they’d just left a rave, all decked in fluorescent colors, or maybe dressed as characters from Alice in Wonderland. You have to check twice that you’re not still dreaming. But no, it’s all very real. What are they doing? Where have they been? Chances are, they’ve been to a Daybreaker morning rave. Possibly aboard a Hornblower yacht.

Daybreaker has literally turned the idea of raving on its head. No more hedonism until the early hours — these are alcohol-free morning parties for people interested in wellness and a healthy lifestyle.

You may have heard of Daybreaker. It’s received press everywhere from the New York Times and Wall Street Journal to Buzzfeed and Thump.

It’s no wonder Daybreaker has received so much attention and awakens such curiosity in people — the first response almost always seems to be disbelief. Are people really waking early to go to a dance party before work?

Yes. Yes they are. And it’s a growing movement.

The first Daybreaker happened in 2013. They have now hosted early morning parties in 12 cities around the world with plans underway in another 13.

And Hornblower has been along for the ride almost from the beginning. We were there to celebrate the first anniversary with legendary Burning Man DJ Scumfrog aboard the Hornblower Infinity in New York Harbor.

When Daybreaker expanded to the West Coast, Hornblower was there with parties at San Francisco and Marina Del Rey.

Among the most memorable Daybreaker events have been the Halloween parties. If you thought it was enough to get up before the break of dawn to go to a dance party, then you won’t believe the amount of effort that goes into some of the costumes.

A cruise is the perfect match to the Daybreaker ethos – the sense of health and wellness, friendliness and camaraderie is multiplied out on the water as you watch the sunrise. It adds that extra element of nature that a regular dance party in a club can’t provide.

Throw in a bit of yoga, healthy treats from Kind bars, and fresh juices and it’s easy to see why Daybreaker is becoming such a phenomenon and why their parties aboard Hornblower yachts are some of their most memorable events.

But for anyone who is skeptical, just take a look at how much fun people are having. The smiles on the faces. The exuberance, and energy… all while the sun rises.

Give it a go. Make the change. Don’t be one of the people drearily marching to work. Be one of the people gleefully looking forward to the workday ahead in their fluorescent colors, having just finished a beautiful and crazy Daybreaker party.

And there’s no time like the present! Daybreaker regularly hosts morning parties with Hornblower.… Find out when the next Daybreaker cruise will be coming to your area here. To learn more about Hornblower, click here.