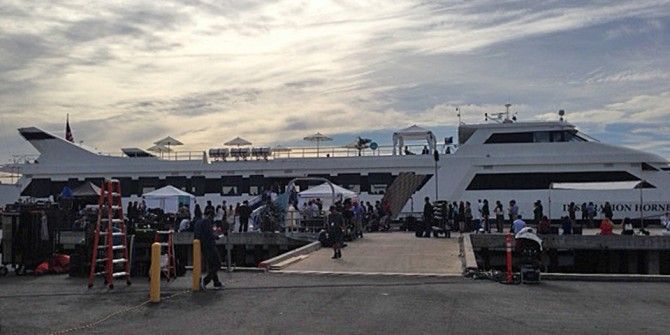 In January, CBS Corporation chartered the Inspiration Hornblower for the hit Scorpion TV show in Los Angeles, California. The amazing flagship of our San Diego fleet hosted five days of Hollywood on board! The Hornblower San Diego Operations Crew and yacht traveled to the Port of Los Angeles, where stars of Scorpion: Katharine McPhee, Robert Patrick and Elyes Gabel were caught on set for Season 1 Episode 16 “Love Boat.”

In this season’s latest Valentine’s Day themed episode, Team Scorpion went undercover on a cruise ship to locate and disable deadly stolen rockets. Each level of the Inspiration Hornblower was transformed to have the look and feel of a cruise ship. The Sky Deck was converted into a Lido Pool deck, the interior levels provided the perfect ambience for formal dining shots and sets were brought in for the state guest rooms. Even the pilot house took on a new look as a control room, where Paige Dineen (played by Katharine McPhee) was tasked with shutting down the engine during an action-packed escape scene off the back of the yacht, thanks to an extensive stunt team.

Hornblower Cruises & Events Captain Anthony was on edge from all the action, saying:

“these shoots can be scary for a safety conscious captain, since they wanted the most exciting stunts performed that they could create, including stars jumping overboard!”