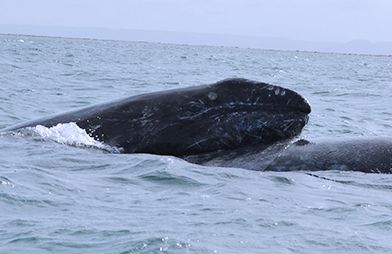 One of the highlights of the gray whale migration is watching mothers tend to their tiny, newborn calves as they travel south. We spotted our first cow-calf pair on January 7 and have seen a couple other pairs during the week. As of January 13,  The American Cetacean Society’s Gray Whale Census has reported 8 newborn calves spotted so far this season along the Southern California Coast.  The mothers and calves are traveling to one of several protected lagoons in Baja California, Mexico— Laguna Ojo de Liebre, Laguna San Ignacio, and Bahia Magdalena. While many calves are born in the sheltered lagoons, some are born when their mother’s are journeying past the coast of Southern California.

A playful gray whale calf and its mother