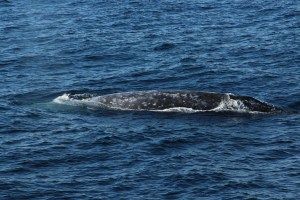 Over the past two weeks, we’ve been seeing more and more Gray Whales traveling north along San Diego’s coast. Juveniles and adult females (without calves), and adult males are migrating about 5,000 to 6,000 miles to the productive feeding grounds in sub-arctic and arctic waters. Females with calves remain in the calving lagoons in Baja California, Mexico until March or April to let their calves build up enough strength for the long journey north.

Gray whales mostly fast during the migration and while at the southern breeding grounds. Once they reach the feeding grounds, the whales will filter feed mostly on benthic (bottom-dwelling) amphipods (shrimp-like crustaceans) found in shallow, sand- and mud-bottomed habitats of the seafloor. When feeding, a gray whale will turn on its side (most are “right-handed”) and suction in huge mouthfuls of the top layers of sediment containing the amphipods. The whale will then close its mouth and strain the mud and water out of through the baleen on the opposite side, then lick up the food with its tongue. The whales will feed from late spring through fall to build up their blubber layers in preparation for the southward migration in the late fall.