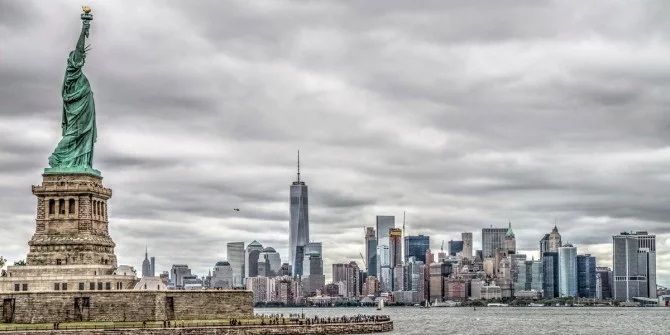 There is no other destination that feels more festive than New York City during the holiday season. With bold, creative department store window displays on Fifth Avenue, the towering Rockefeller Center Christmas Tree, the lighting of the world’s largest Hanukkah menorahs and the Times Square New Year’s Eve countdown that the whole world watches as the city is lit up for the festivities. And just after it snows, there’s the beauty of the City’s streets blanketed in white. Just pull on your wool cap, grab a hot chocolate and explore the five boroughs during the city’s most wonderful time of the year.

Visitors and locals alike will enjoy the Holiday Train Show at Grand Central Terminal as well as the amazing New York Botanical Garden version, which features more than 150 New York City landmarks re-created using bark, leaves and other plant pieces. Now in its 82nd year, the Radio City Christmas Spectacular features the world-famous Rockettes. And for some one-of-a-kind gifts, visit one of the City’s many holiday markets, where mom-and-pop vendors sell clothing, jewelry, household items and specialty foods. Read on for further details about these and many other events.

In its 82nd year, Radio City Music Hall’s iconic song-and-dance extravaganza, featuring the legendary Rockettes, is one of the holiday season’s must-see attractions. Onstage from November 13th – January 3rd, this year’s show combines classic scenes such as “Parade of the Wooden Soldiers” and “New York at Christmas” with all-new numbers and cutting-edge digital projection and digital mapping technology, transforming Radio City Music Hall’s interior into a giant canvas. Certain dates throughout the season are designated as “Santa hat” days, when free hats are given out to theatergoers.

On display at the New York Botanical Garden from November 21st – January 18th, model trains navigate painstakingly crafted miniatures of New York City’s built environment, all made entirely out of plant parts. The Statue of Liberty, the Brooklyn Bridge, Yankee Stadium and more than 150 other landmarks form a fantastically rendered City landscape built from seeds, bark, leaves and twigs, serviced by a robust quarter mile of track, all nestled underneath the glass ceilings of the historic Enid A. Haupt Conservatory. This year, 3,000 feet of additional space have been added to the exhibition, making room for more trains and a multisensory light and sound show.

It doesn’t get much more picture-postcard perfect than the sight of the stately Rockefeller Center Christmas tree, towering above the ice rink below, all decked out in its finest holiday bling. Things get festive on December 2nd, when thousands of revelers fill the area for the lighting of this year’s Norway spruce. A star-studded lineup, hosted by NBC anchors, provides plenty of live entertainment. The crowning moment comes when the switch is flipped and the Swarovski star–topped tree’s tens of thousands of (energy-efficient LED) lights come alive. If you can’t make it to the big event, no worries as you can see the tree through early January.

Both the Manhattan and Brooklyn Grand Army Plazas serve as host to competitors in the race for World’s Largest Hanukkah Menorah. Gather around the 32-foot-high, gold-colored, 4,000-pound steel holiday icon across the street from The Plaza Hotel to kick off the annual Jewish Festival of Lights; lightings generally take place at 5:30pm, though Friday’s it is at 3:30pm and Saturday’s at 8pm, bookending the Sabbath. Across the East River, go to the traffic circle at the top of Prospect Park for lightings that are at 6pm most evenings, with Wednesday’s and Friday’s at 3pm and Saturday’s at 7pm.

Celebrate the arrival of 2016 on December 31st with the annual Times Square Ball Drop. Nothing compares with the exhilaration of watching the fete from the streets, plus you can catch music and other performances before and after midnight. This year’s headliner is country superstar (and 2005 American Idol winner) Carrie Underwood. It’s best to get to Times Square as early as possible in the day as street closures begin during the midafternoon and the choicest spots are usually filled by 3pm or earlier.

Holiday MarketsHoliday Markets:
There’s no shortage of hopping in New York City at any time of the year. But holiday shopping is an exceptional experience in the city with all the lights and window displays on view and the general merriment that abounds. While stores certainly carry some holiday gems, you’re best off grabbing a hot drink and carrying it to one of New York’s many outdoor holiday markets, where you’ll find an assortment of homemade wares from craftspeople and mom-and-pop shops that should cover everyone on your holiday shopping list. The biggest and best selections can be found at the Union Square Holiday Market, the Holiday Shops at Bryant Park, the indoor Grand Central Holiday Fair and the Columbus Circle Holiday Market.