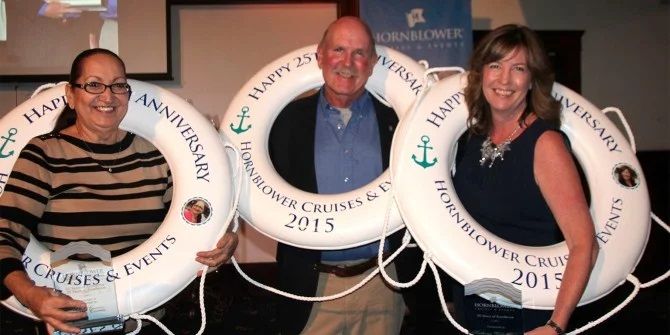 Hornblower Cruises & Events is proud to celebrate the 25th anniversary of three veteran employees who have helped shape the personality of the company for more than two decades.

At a ceremony in December at The Abbey on Fifth Avenue, Captain Rich Goben, Kathryn Wells and Artie Correa were honored for their commitment to Hornblower and their many contributions to the growth of the company.

According to Jim Unger, General Manager of Hornblower Cruises & Events – San Diego, “Last month, we celebrated the 25th anniversaries of three great Hornblower leaders.” Unger continued, “They are amazing individuals who, through their own entrepreneurial spirit and creative thinking, became key catalysts in the success of the company. It is an honor to recognize their accomplishments and we are thrilled to have built an inviting, caring company culture where these talents could take root and eventually bloom into the outstanding mentors they have become! Congrats to Artie Correa, Kathryn Wells-Waters and Captain Rich Goben!”

Captain Richard Goben has had an enviable career at sea, starting out as a sailing instructor while attending UCSD in San Diego. While in college, Goben also received his first Coast Guard license, ran classic sail and power passenger vessels and authored many stories for magazines like Sail and Sea. Prior to joining Hornblower, Goben crewed on the 1863 Barque Star of India, then evolved into Mate and Master status. He then went on to operate the Maritime Museum’s 1904 Steam Yacht, Medea, which he still operates. It was in 1990 that Goben joined the Hornblower crew as Port Captain when the company purchased Invader Cruises, for which Goben was a Captain.

In addition to his illustrious career, Goben has earned a wide range of awards, honors and accomplishments, including: a Master’s license for power, steam and sail vessels; certification as Able Seaman, Unlimited; completed the Naturalist class at the San Diego Natural History Museum; service on the San Diego Harbor Safety Committee, Area Maritime Security Committee, Passenger Vessel Association of the United States; received the “Outstanding Leadership” award from the Naval Order of the United States, International Maritime Person of the Year from International Propeller Club; “Hospitality Employee of the Year” Gold Key Award from HSMAI; “Creative Innovation in Sailing Programming” Award from US Sailing; and nomination for the Maritime Hero Award; to name just a few.

In his spare time, Goben enjoys playing the guitar and singing.

As Corporate Director of Sales for Hornblower’s San Diego Port, Kathryn Wells leads a team of thirteen and directs the national sales efforts for the corporate, convention and incentive markets for all of the company’s ports.

Wells is a veteran of the industry, starting her career in 1988 with Invader Cruises and joined Hornblower in 1990, holding sales and management positions in all five of the company’s California locations as well as assisting with the launch of the newest port in New York. In addition to her work experience, Wells has served many industry organizations, including Society of Incentive Travel Excellence (SITE) where she is currently Vice President of Leadership on the SITE SoCal Board.

A graduate of the State University of New York – Buffalo, Wells enjoys her spare time with her husband and pets as well as traveling, water craft and good wine.

Artie Correa is a graduate of San Diego State University and has had a lengthy Accounting career as an Auditor, Accounting Specialist and Manager. When Hornblower acquired Invader Cruises in 1990, Correa was brought on to the crew and has since been a key asset and has assisted in the launch of other ports and various national park contracts, including Alcatraz, Sacramento, New York and Niagara Falls. Born in Santa Maria and raised in San Diego, Correa is a dedicated Chargers fan who is sad to see the franchise possibly coming to an end. Family is her number one priority as she comes from a family of nine and her husband from a family of twelve. She enjoys camping, barbeques, weekend trips and vacations with her large family.

And, a toast to these three dedicated and talented associates,

There are good ships and wood ships, ships that sail the sea.

But the best ships are friendships, and may they always be.