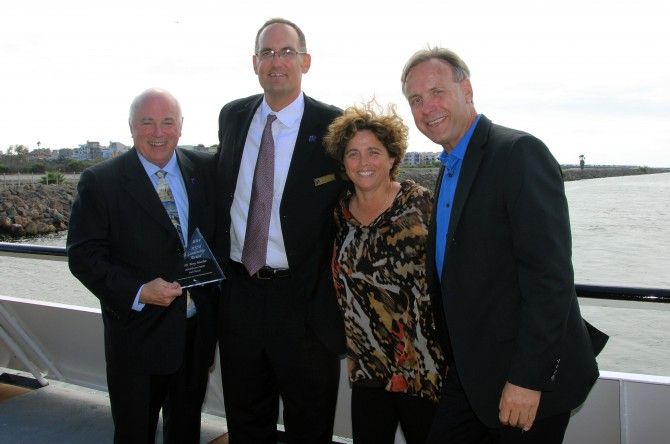 TERRY MACRAE HONORED BY THE TRAVEL & TOURISM MARKETING ASSOCIATION
October 17, 2014 Angela Lyons
Hornblower Cruises & Events Founder and CEO Terry MacRae was honored October 15, 2014 by his colleagues at the Travel and Tourism Marketing Association as the 2014 recipient of the Anastasia K. Mann Leadership Award recognizing the importance of leadership in California’s travel and tourism industry.

“There is no greater honor than to be part of a professional crew,” said MacRae in remarks at the awards ceremony held aboard a Hornblower yacht, the classic “Entertainer” at Fisherman’s Village, Marina del Rey. “It continues to be my privilege to grow and improve our industry for everyone concerned, in a sustainable manner, especially our passengers and guests.”

For over thirty years, MacRae’s leadership has established Hornblower as a landmark along San Francisco’s waterfront and in the Golden State. In addition, Hornblower has become the entry point to other great American landmarks. Hornblower subsidiary Alcatraz Cruises is the exclusive operator of tours to San Francisco’s historic Alcatraz Island. On the East Coast, the Statue of Liberty and Ellis Island are proudly served by Hornblower’s Statue Cruises. Just this year, a natural wonder was added to the Hornblower family when Hornblower’s Niagara Cruises commenced providing cruises around Niagara Falls.

“Terry is an icon of California tourism,” said Joe D’Alessandro, President and CEO of SF Travel. “Always proud of his San Francisco roots, Terry has extended the Hornblower brand across the state and across the country. He represents the very best of tourism, the lifeblood of the California economy.”

After graduating from Cal Poly – San Luis Obispo, MacRae turned his passion for preserving our natural resources into a career as an environmental engineer. When a small two-boat charter operation in Berkeley, California came on the market, MacRae had an idea: build a unique and sustainable hospitality tourism brand. Hornblower set sail.

Now with over 70 vessels on two coasts, MacRae has led Hornblower into an enviable position as the industry’s undisputed leader, including operation of the nation’s only fleet of hybrid ferries.