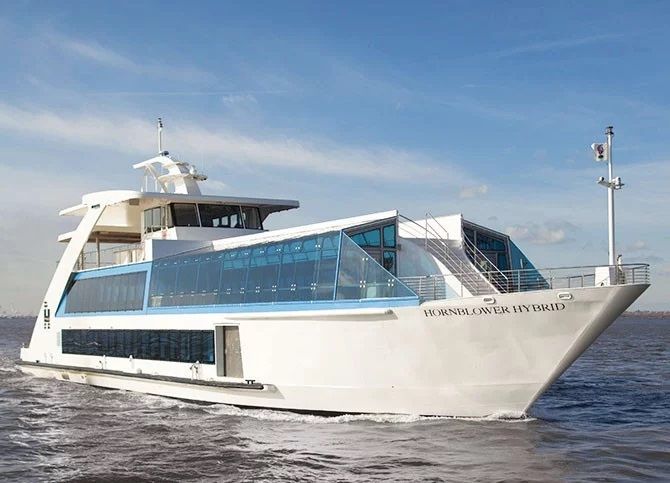 In late 2013, Capstone challenged marine professionals around the world to explore the benefits of microturbine technology with a contest to win up to 130kW of free Capstone microturbine power for their vessel. After careful consideration, Capstone selected Hornblower and the Hornblower Hybrid yacht using contest criteria based on economics, performance, and application of the solution.

Hornblower promotes their hybrid yachts as the greenest and most innovative dinner and sightseeing cruise ships on the water, boasting leading edge technology, creative cuisine, and signature Hornblower service. Instead of idling at the dock or burning diesel to keep the lights on, a standard practice in the industry, the Hornblower Hybrid switches from diesel power to battery mode to save fuel and reduce emissions. In addition, the Hornblower Hybrid reduces annual diesel consumption by more than 29,000 gallons! That is equivalent to taking 58 cars off the road permanently or planting 90 acres of trees. The hybrid boat uses approximately six gallons of diesel fuel per hour, compared to 30 gallons per hour used by a conventional ferryboat.

Deployed in a highly efficient combined heat and power (CHP) marine application, the microturbine will also satisfy the hot water needs of the vessel. This innovative microturbine solution is expected to be commissioned in early 2015.

“Capstone looks forward to working with an innovative company like Hornblower to provide clean and efficient power to such an eco-friendly vessel,” said Jim Crouse, Executive Vice President of Sales and Marketing at Capstone Turbine. “Microturbines are ideal for power generation in marine applications because of their ultra-low emissions, minimal maintenance, small footprint, ease of installation, quiet operation, and lack of lubricants and coolants,” added Crouse.