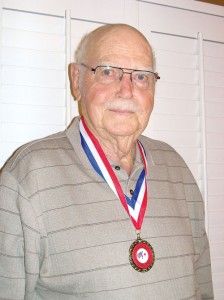 Recently, Hornblower San Diego had the pleasure of hosting Robert Vogler Jr. and his family onboard our our dinner cruise to celebrate his wife’s 85th birthday. Mr. Vogler is a former POW and survivor of the Bataan Death March during World War II.

The Bataan Death March began on April 9, 1942, when the Japanese Army forced more than 60,000 Filipino and American prisoners of war to march 65 miles through the Philippines. The march was characterized by physical abuse and murder, and was declared a war crime by the Allied military commission. Hundreds of prisoners reportedly died during the march, though the exact death toll has been difficult to determine due to the conditions of the war at the time. (Source)

Since the war, Mr. Vogler has been an active member of the POW community, and participated in a delegation that traveled to Japan in October of 2011. The group of seven delegates were all former POWs who were imprisoned by Imperial Japan after the Battle for the Philippines in early 1942. Mr. Vogler joined the US Army Air Corps in January 1940, when he was 19 years old. After his capture following the Battle for the Philippines he survived the Bataan Death March, Camp O’Donnell and Cabanatuan in the Philippines. He eventually found himself in a slave labor camp in China and worked at the MKK factory, which stood for Manshu Kosaku Kikai. He also had to undergo medical treatments that he believes were experiments conducted by the Imperial Army’s biological warfare unit. In 1944 he was transferred to Japan as punishment for bad behavior to work for Mitsu Mining. After World War II Mr. Vogler remained in the US Air Force retiring in 1960, and went to work for General Dynamics for sixteen years. In 2000, Mr. Vogler and his wife returned to Japan, to meet with mine representatives, town officials and citizens. (Source)

Following their cruise with us, we received the following message from his daughter, Julie:

I am so proud of the Hornblower for giving such a generous ticket price to our Military, without the discount they couldn’t participate. We celebrated my mom’s 85th birthday with a group of 12 of us and we were all so impressed with everything and our food was excellent. Many times when you attend and get banquet type food it isn’t good but yours was superb. My step dad is a POW and Bataan Death March survivor and the Captain (Rich Goben) came to our table and spoke with him and then invited him to the top as his guest. He was so kind and it made my dad feel very important. Thank you so much again.

Thank you to Mr. Vogler for his service to this country, and to all our members of the armed forces, past and present. We are pleased to extend a discount to our service men and women. Current service members can purchase tickets as special rates for any of our public cruises in any of the cities in which we operate by visiting their MWR office on base. Additionally, military discounts are available through our website or by calling our reservations department at 888-467-6256.

Image of Robert Vogler Jr. from the Pomerado News. The newspaper featured him in October 2011, following his visit with other POWs to Japan. In the picture he is wearing the Japanese-American friendship medal received during that trip.