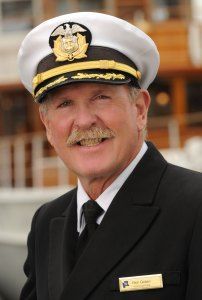 Hornblower Cruises & Events regretfully announces the passing of veteran employee, Captain Richard Goben, who helped shape the GobenRich-for-web-onlypersonality of the company for more than two decades.

According to Hornblower – San Diego General Manager Jim Unger, “It is with great sadness and a heavy heart that I report that our beloved Captain Rich Goben passed away recently, after a month-long battle with pneumonia.”

“Captain Rich was a great example to all he touched,” comments Terry MacRae, CEO of Hornblower Cruises & Events. He continues, “A Captain’s Captain, Rich was a true professional, a caring spouse, a teacher and a giving man who loved being on the water and sharing his craft and his life with others.” MacRae observes, “Rich contributed mightily to Hornblower’s safety, our Q2 culture and the overall success of the company over many years. He will be missed but his contribution and passion will remain with us forever.”

Captain Rich was a strong leader and eloquent speaker for Hornblower. According to his colleague Rebecca Milkey, Regional Director of Marketing for Hornblower in Southern California. “Richard was the voice, the face of Hornblower; anytime we needed an interview, a photograph with our VIP’s or a professional opinion, Rich was the man to go to for my public relations needs.” She continued,” Rich was featured on Hornblower brochures, letterhead, commercials, in photo shoots and in videos over the 25 years he was port Captain always impeccable in the uniform and with a warm smile.”

The company copied Captain Rich’s likeness for the souvenir Hornblower Captain Bobble head that they give as gifts to clients and VIPs.capt rich bobble

Captain Goben had an enviable career at sea. He taught sailing while attending the University of California, San Diego. During this time, he received his first Coast Guard license. He ran classic sail and power passenger vessels for many years. During his college days, Richard had articles and photographs published by magazines such as SAIL and SEA. In the 1980s, he participated in the 1983 Americas Cup Challenge as navigator for Dennis Conners’ “Freedom Campaign” B-team, and ran the “spy” weather boat during the actual races off Newport Rhode Island. In 1984, Richard began crewing on the 1863 Barque Star of India for the San Diego Maritime Museum. In 1996, Richard served as Mate, then in 1998, became Master of The Star which is the oldest active sailing ship in the world, and the only Class “A” sailing vessel known to not have an engine. In 1990, Hornblower Cruises bought Invader Cruises, and leased the 150 foot racing schooner, Invader. Richard was the Captain of the Schooner Invader at the time, and joined Hornblower as their Port Captain. In addition to his Port Captain duties, Richard was also the Facility and Vessel Security Officer for Hornblower San Diego. He holds a Master’s license for power, steam and sail vessels of 1600 tons (Inland Mate) and 500 tons, (Ocean Master). He was also certified as Able Seaman, Unlimited. Captain Rich had been operating passenger vessels since 1978.

Richard served on the San Diego Harbor Safety Committee, and on the Executive Steering Committee of the Area Maritime Security Committee. He also served on the Safety and Security Committee for the Passenger Vessel Association of the United States. Richard was also an instructor in CPR/AED and First Aid for the American Red Cross. In 1998, he received the “Outstanding Leadership” award from the Naval Order of the United State. Richard headed a volunteer program and he himself participated 50 times in narrating on US Navy ships during family cruises as they returned back home into San Diego Bay after long tours of duty. Other awards include the 2000 “Hospitality Employee of the Year” award from Hotel Sales & Marketing Association in San Diego, and the 2001 “Creative Innovation in Sailing Programming” Award from US Sailing. In 2002, Richard was awarded the first Annual “Roger Murphy National Safety Award” from the Passenger Vessel Association. He also served on the PVA National Safety and Security Committee. In addition to his Port Captain duties, Richard was also the Facility and Vessel Security Officer for Hornblower San Diego.

In his spare time, Goben enjoyed hiking, camping, fly fishing, birding, and recently had gotten his Ham Radio license. He enjoyed spending time outside the city at his home in Descanso, CA. He loved sea birds, dolphins and whales and he completed the Naturalist class at the San Diego Natural History Museum. He volunteered with his wife on the Raptor Rehabilitation team for Project Wildlife. And he enjoyed playing lead guitar and mandolin and singing with his closest friends in his band ”Just Friends”.

“The heart of ‘Just Friends’ has been broken and only time will mend it,” said Richard’s best friend and band mate John Salzano, who recently posted this prayer on Facebook.rich-with-guitar

May the road rise up to meet you.
May the wind be at your back.
May the sun shine warm upon your face.
May the rain fall soft upon your fields, and until we meet again,
May God hold you in the palm of his hand.

Unger concludes, “Captain Rich led a life of exemplary kindness, humility, fairness and love towards others. We are grateful for the positive impact and legacy Captain Richard has left with us…he will never be forgotten.”

Richard is survived by his wife Carolyn of 28 years, and Mother Virginia Goben who resides in Virginia and his two sisters and brothers in law Gerry and Bob O’Neill who reside in Tennessee and Ginger and Bryan Weisbarth who reside in Ohio.