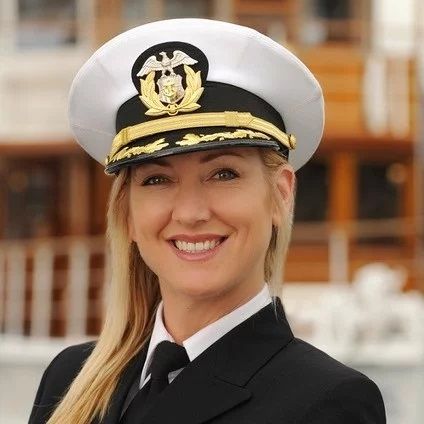 CAPTAIN JULIE PEET IS HAVING A WHALE OF A TIME

Hornblower Cruises & Events’ captain, Julie Peet loves water. In it, or on it, Julie has to be near it. She was born and raised in San Diego, always at the beach as a child and a self-described “Tan lil’ toe head.” Julie’s grandfather lived on a sailing boat and when she wasn’t visiting him, she passed the time swimming or surfing.

Now a mother of an energetic 8-year old son, Julie still finds time for plenty of paddle boarding and parasailing. “I’d sail a trash can lid if I have the right tools to make it buoyant. The ocean is my happy place.” Being near the water enjoying the cool ocean breeze, the sound of crashing waves, or the smell of salt in the air brings a smile to her face.

So, is it really surprising that Julie became a Hornblower captain? It wasn’t in her original life plan. “I was going to college and training to be a firefighter. Then fishing changed my life. My first trip out on a fishing boat was amazing. I kept catching fish after fish. To me that first bite and tug on the fishing pole was so exciting, I had to have more!”

Julie was hooked. She went out on fishing boats as often as possible. Eventually one of the captains offered her a job as a deckhand. “I jumped at the opportunity because at that time there weren’t any girl deckhands, so I didn’t think anyone would offer to hire me.” Julie took to her new role like a fish to water. “I considered it a privilege to be a deckhand but never thought I would ever become a captain. As a deckhand I was able to save up enough sea time to apply for my USCG Masters license. When my grandfather passed away, I used my little inheritance money to pay for my schooling at The Maritime Institute.”

That investment in herself certainly paid dividends as she has been using the ocean as her office ever since. “I worked as a second captain and worked my way up on fishing boats-then started working in San Diego Bay about eight years ago, eventually on even larger vessels.” Amongst Hornblower’s fleet of yachts in San Diego, one vessel stands out. The 300-passenger Adventure Hornblower is definitely Julie’s favorite vessel to captain. “It’s sleek and powerful and fast. It has a V-shaped hull with a bulbous bow. That thing moves!”

So what is it about being out on the water that she finds so appealing? “I love going out far, the further the better, out of cell phone range,” says Julie. “You leave everything else behind and observe. If you are open and aware of your surroundings you can see amazing things that no one else gets to see, once in a lifetime opportunities. I also like how small the ocean makes you feel.”

Julie says the best part of being a Hornblower captain is interacting with guests. She loves being able to educate them about the fragility of the oceans and our role to help conserve them.

It’s her keen eye that helps whale watchers catch sight of the giant creatures before they appear on the surface. She has been on thousands of whale watching trips and can recognize shapes, patterns and colors way off in the distance. This is the result of years fishing, staring at the wide ocean horizon and looking for any signs of life. Julie says her eyes are well trained to decipher every kind of speck or splash on the horizon. “It’s a crucial part of catching fish and, of course, spotting whales and other sea life.”

In the four years Julie has been with Hornblower she has many memorable experiences on the water but there was one that she will always remember. “A terminally ill young girl came out as part of the Make-A-Wish Foundation. I didn’t know she was on the boat until the end of the cruise, but we had a spectacular trip that morning with lots of grey whales, and hundreds of common dolphin. Really good show that day, and as the passengers were leaving the boat she and her mother walked up to me and told me their story and then thanked me for the best day of their life and I just about cried. Any time I see people get as happy and excited as I do out on the water is a best day ever.”

Some of Julie’s most memorable experiences have also been some of the strangest. Two in particular reveal the circle of life in the vast marine underworld of our planet. “Seeing a baby grey whale being born was breathtaking and probably one of my best days ever. Last year there were so many calves. I’ve also seen a great white eat a dolphin and another hunting a sea lion.”

You never know what you’re going to see or experience out in the big blue waters off of San Diego on a Hornblower whale watching cruise. But the odds are pretty good that you’ll spot Captain Julie Peet at the helm.