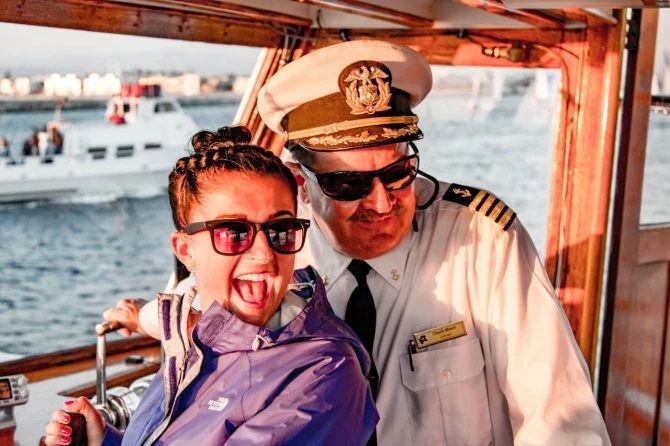 It wasn’t long before Chuck felt like a career change with his feet on solid ground this time. So he took himself back to school at El Camino College to study video production. Proving once again to be a good student, Chuck landed a position as a studio camera operator at Time Warner Cable. That experience gave him the chops to start his own show where he could combine his love of fishing with his skills as a videographer. The result was The West Coast Sports Fishing Show. It won three Telly Awards for Chuck and gave him the opportunity to work with Michael Fowkles on his Emmy Award winning TV show on Fox Sports. Michael became a mentor for him and with the editing and video work Chuck created, he went on to win the Golden Telly Award.

With 4 Telly Awards for outstanding achievement in the world of sports photography, Chuck was ready for another career challenge. He’d been up in the air and down on the ground. Now he was ready to take to the water. And it was time to get a few more licenses under his belt.

One license in particular was issued under the authority of the State of California for Chuck to marry couples. “I’ve married 435 Couples to date from the past years working at Hornblower,” says Chuck, proudly. He’s even helped birth a baby aboard a charter yacht, which is no mean feat as he had to steer the boat at the same time. Happily, all passengers were delivered safely to port

So what is his funniest moment from all the weddings he has officiated? “The one that sticks out was a wedding where the groom wore a superman costume. The bride had no clue he was going to dress up.”

Chuck began his Hornblower career as a First Officer and worked his way up to the rank of Captain and cites Hornblower Captain Doug Cooper as a mentor who he still misses.

His favorite Hornblower events are the public brunch and dinner cruises while his two favorite yachts to captain are two of the oldest boats in the Hornblower fleet, Wild Goose and Zumbrota. Though Chuck says the best day of his life was when he captained Entertainer for the filming of American Sniper, directed by Clint Eastwood. “My dad was a huge Clint Eastwood fan. I grew up watching his movies. My dad passed a few years ago and I was able to meet Clint that day and told him about my father.”

Today, Capt. Chuck is Marine Operations Manager at Hornblower Cruises & Events’ Marina del Rey port where he runs a tight ship but never misses the opportunity to photograph those glorious California sunsets. And when he’s not working at Hornblower, Chuck hangs out with his favorite friend. “I have a Golden Retriever. His name is Logan and he’s 9 years old. He’s my best buddy!”

It’s a good bet Chuck has a dog license, too.