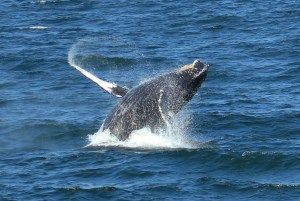 Photos by Ken Shelby, captured these great images of a breaching Humpback Whale just off Mission Bay from the rails of Hornblower on their recent whale watching cruise. Mr Shelby is a frequent cruiser aboard Hornblower Cruises Whale Watching Cruise because he is one of the trained Naturalist from San Diego Natural History Museum. Ken said that this whale breached about

This time of year, Hornblower Cruises sees a variety of whales on their whale watching cruises. In addition to Gray whales, humpback whales, Minke whales, fin back whales and Blue Whales are seen. The Gray Whale watching season ends on April 27th as the last of the migrating mammals travel by the San Diego coast.