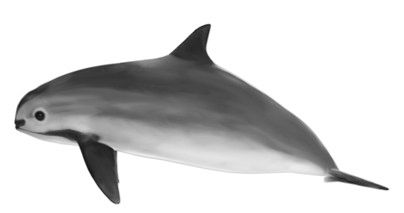 International Save the Vaquita Day is July 9, 2016!

Update:
A recent report for the Vaquita Population as of August 2016, estimates that only 30 individual vaquitas are left! This indicates that the vaquitas are still disappearing at an alarming rate, despite the gillnet ban within their range. Visit VivaVaquita.org to learn more and discover how you can help.

While you may be lucky enough to spot a blue whale, the largest animal on Earth, during a Hornblower Summer Blue Whale Cruise, did you know that the smallest cetacean (whales, dolphins, and porpoises) lives only about a four-and-a-half hour drive from San Diego? This animal is a striking little porpoise called the vaquita. The vaquita is mostly gray with dark lipstick- and eyeliner-like markings. The largest vaquitas only grow to a maximum of five feet long!

Unfortunately, only about 60 vaquitas remain. Why is this tiny whale so endangered? The first reason is that its range is restricted to the northern Gulf of California. The total area in which the vaquita lives is about a quarter of the size of Los Angeles, California. The vaquita is a naturally-rare species with the first population estimate in 1997 at about 567 individuals. This restricted range is what makes the vaquita so vulnerable to fishing activities, particularly accidental entanglement in gillnets — fishing nets set for fishes and shrimp. In an effort to save the vaquita, the Mexican government placed a two-year ban on gillnets within the vaquita’s range. Yet, poachers continue to use gillnets to catch a large, valuable fish called the totoaba. Dried totoaba swim bladders (the organ many fish use to maintain buoyancy) are smuggled into the U.S. and then sold for thousands of dollars on the black market to China and Hong Kong. The dried swim bladders are used in a soup called “fish maw”, which is believed to have medicinal properties. Sadly, totoaba poaching continues to entangle and kill vaquitas.

The good news is that the solution to saving vaquitas is as simple as removing the threat of gillnets from the vaquita’s range. To help vaquitas and other ocean animals, Hornblower sources from sustainable fisheries for its public and private dining cruises. Instead of Mexican white shrimp, Hornblower serves Selva shrimp, a type of farmed-shrimp labeled as a “best choice” from the Monterey Bay Aquarium’s Seafood Watch Program. You can help by choosing “vaquita-safe” shrimp — shrimp that is not wild-caught from Mexico — when dining at home, at a restaurant or while on vacation.

Saturday, July 9th is International Save the Vaquita Day — a day designed to raise awareness about the world’s most endangered marine mammal, the vaquita. You can celebrate by spreading the word about the plight of this little-known, porpoise before it disappears. For more tips on how to help vaquitas visit VivaVaquita.org.