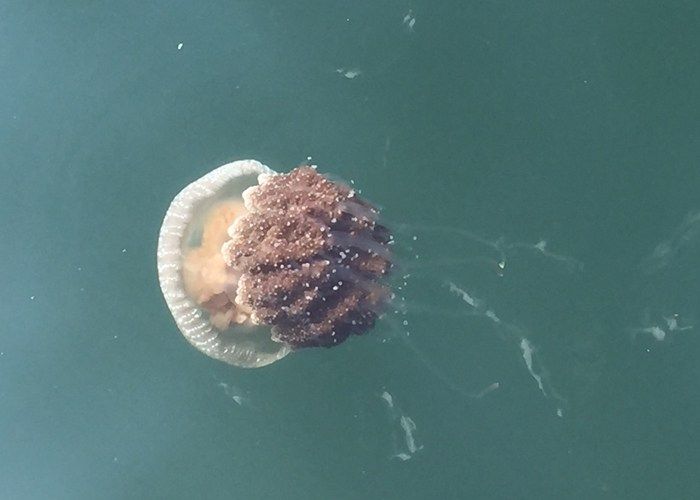 Invasion of the Jellyfish!

White-spotted Jellyfish have been recently spotted in San Diego Bay

While we may occasionally get visitors from Australia on Hornblower Whale Watch Cruises, recently another Australian visitor has been spotted floating and pulsing in San Diego Bay by the boats. These visitors are white-spotted jellyfish (Phylorrhiza punctata), which are native to Australia, and introduced many areas including Hawaii, the Caribbean, and the Gulf of Mexico. White-spotted jellyfish were first noticed in San Diego waters in the 1980s and were probably accidentally brought to our coast in the ballast tank or attached to the bottom of a ship. In September of 2015 and again this year, the warmer waters from El Niño may be linked to population explosions and increased sightings of this species.
Jellyfish are cnidarians —a group of aquatic, stinging animals that includes sea anemones, corals, box jellies, hydroids, and siphonophores (Portuguese man-o-wars and other colonial, gelatinous drifters.) Most jellyfish transform from a tiny planktonic larval stage to an attached anemone-like stage to a free-swimming life stage called a medusa. The medusa (or adult stage) is what we typically think of as a jellyfish and is the life stage of the white-spotted jellies in the bay.
Like most other jellies, white-spotted jellyfish have stinging cells in their tentacles that they use to capture zooplankton (tiny, drifting animals) and for defense against possible predators. Although these jellies sting, they are considered mildly venomous and not harmful to humans. However, they can harm habitats. Unintentionally introduced species like the white-spotted jellyfish are termed an “alien” or “invasive” species. The problem with invasive species is that they can out-compete native species that eat the same kinds of prey, especially during population explosions. While no harmful impact has been seen in San Diego, in the Gulf of Mexico, large swarms of these alien visitors have threatened some populations of native fishes and shrimp.