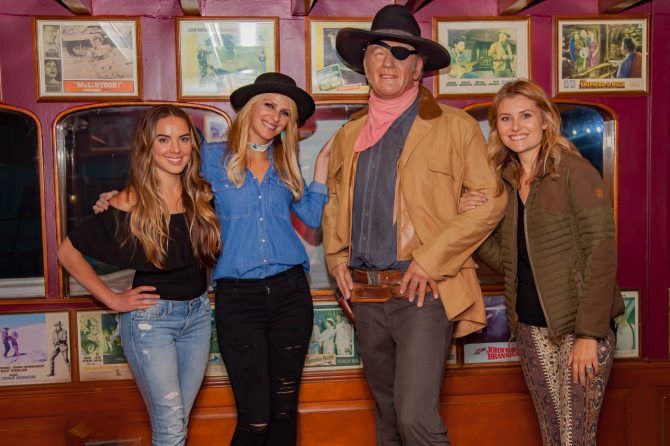 May 26th would have been John Wayne’s 110th birthday, so his yacht Wild Goose in Newport Beach was the perfect setting to celebrate the Hollywood icon’s special day. And it was extra special as several members of the Wayne family came to participate along with friends and fans alike.

Events started in the afternoon at Ensign View Park where it was officially renamed John Wayne Park. Kevin Muldoon, the Mayor of Newport Beach, who coincidentally shares the same May 26th birthday, led the renaming ceremony with Ethan Wayne.

Then it was onto John Wayne’s famed yacht, Wild Goose to get the party started. It was part of Hornblower Cruises & Events’ series of brunch, cocktail and dinner cruises that are running until June 18th for members of the public to join in the birthday celebrations.

The 136 ft. yacht has been part of the Hornblower Cruises & Events’ fleet since 1995. It was one of Wayne’s most prized possessions and he kept it docked by his home in Newport Beach. The beautifully restored 1942 naval minesweeper was an elegant location for the gathering of the Wayne clan for the onboard musical performance by Runaway June. The Nashville-based country act consists of John Wayne’s granddaughter Jennifer Wayne, Naomi Cooke and Hannah Mulholland who performed a 30-minute set as Wild Goose cruised Newport Harbor.

In the audience was John Wayne’s third wife, Pilar and his two sons, Patrick and Ethan, and daughter, Marisa. Also along for the ride was Mayor Kevin Muldoon, Tiffani Copeland, Vice President of The John Wayne Cancer Foundation and former Wild Goose captain, Bert Minshall.

Following the performance, members of the Wayne family entertained the audience with fond memories and funny stories about the John Wayne we never knew off camera. Later in the evening, fans of the famous actor and Runaway June got to meet and mingle and pose for photographs with the family and band.

Daughter Marisa Wayne said she’s still discovering just how big a movie star her dad happened to be. “His longevity is amazing; that he is still so loved and respected by so many people this many years after his death. I wish he was around to give me advice, or just talk to or have a drink with.”

When Marissa showed her son, Duke, and daughter, Carmella, the fireplace room on the Wild Goose she tearfully told them, “This is where my dad taught me how to play cards.” She had grown very close to her father before he died, in large part because he had almost stopped working. “He spent a lot of time at home with his family. One of my best memories is going out on the boat. We had this great boat, and it seemed like we were always taking it out on weekends, either just the family or with friends. Back then, there was no such thing as video games or satellite TV, so spending time with your dad was even more special.”

It certainly was a memorable day and night filled with nostalgia and great affection for one of Hollywood’s most famous leading men.

Also in attendance was Hornblower Cruises & Events’ Director of Marketing, Rebecca Milkey who added, “It almost felt as if I was eavesdropping on a Wayne family reunion -listening to the intimate stories of their shared experiences about growing up aboard Wild Goose and seeing joyful faces of them all together to celebrate once again.”