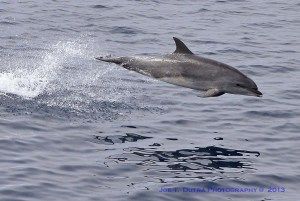 After 3 days of San Diego’s epic winter storm, ” it was a clear beautiful day on the Pacific Ocean this morning. It was a little choppy and windy as Captain Bill headed theAdventure out to the 9 mile bank, but it didn’t dampen the enthusiasm of finding a mega-pod of 1,000 to 2,000 common dolphins about six miles out. There were many mother/calf pairs, and a report of one Risso’s dolphin in the mix. We think we saw blows of Fin whales, because when we got to were we saw the blows there were no whales. We did finally find a very elusive north bound Gray before we had to head back in.

The afternoon cruise was a little choppier and windier making it more difficult to spot blows, but this time the Fin whales were a little more cooperative. One of the four we saw put on spectacular show as it swam near us showing off it’s tall blow and huge back from blowhole to dorsal fin as it came to the surface five separate times. As we neared SD1 on our return we spotted a south bound gray, and a few minutes later a north bound gray showed up.”