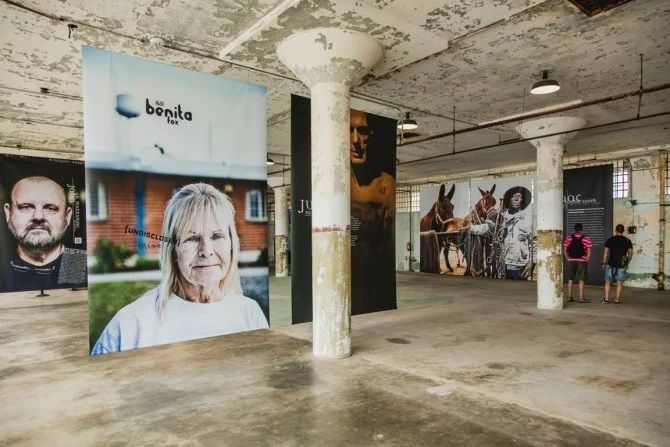 The National Park Service is currently hosting the award-winning ““Prisoners of Age”” exhibition on Alcatraz. The exhibit will run through December 2015 and was produced by photographer Ron Levine and designers Michael Wou and Russel Volckmann. This display marks the next in a series on Alcatraz that focuses on aspects of crime and punishment, incarceration, freedom and social justice.

“Prisoners of Age”” is an evocative series of photographs and chronicles of elderly men and women, taken over a period of 18 years, at prisons and prison-wards for geriatric offenders in the United States and Canada. “Prisoners of Age” comprise the fastest growing age group in the United States. One-in-ten inmates is 55 or older. A decade ago, that was one-in-twenty. Existing prison space is in serious decline and medical costs are soaring. Incarcerating geriatric men and women in prison is becoming prohibitively expensive- up to 9 times the cost of a younger inmate. As Federal and State prisons begin to look more like high security nursing homes, the people who manage North America’s prison system worry about how to handle the imminent explosion in the geriatric population. Through photography and interviews, ““Prisoners of Age”” offers a microcosmic glimpse of what lies ahead in this new millennium

The exhibition features 60 larger than life photographs and revealing narratives from conversations with the inmates, guards and prison officials. The exhibition is designed by Michael Wou and Russell Volckmann.

How to see the exhibit:

The exhibit is displayed in the New Industries Building through December 2015 and will be open to the public visiting Alcatraz Island during daytime hours for no extra charge. Exhibit hours are 10:00am to 2:00pm. For additional information, please call NPS Alcatraz at 415-561-4900.

The full exhibit was last seen at Alcatraz Penitentiary in 2000. It has also been seen in The National Archives of Canada [2002], Eastern State Penitentiary Museum, Philadelphia [2002], Kilmainham Gaol, Dublin [2004], Fremantle Prison Museum, Perth [2010], and The Powerhouse Gallery, Brisbane [2011].