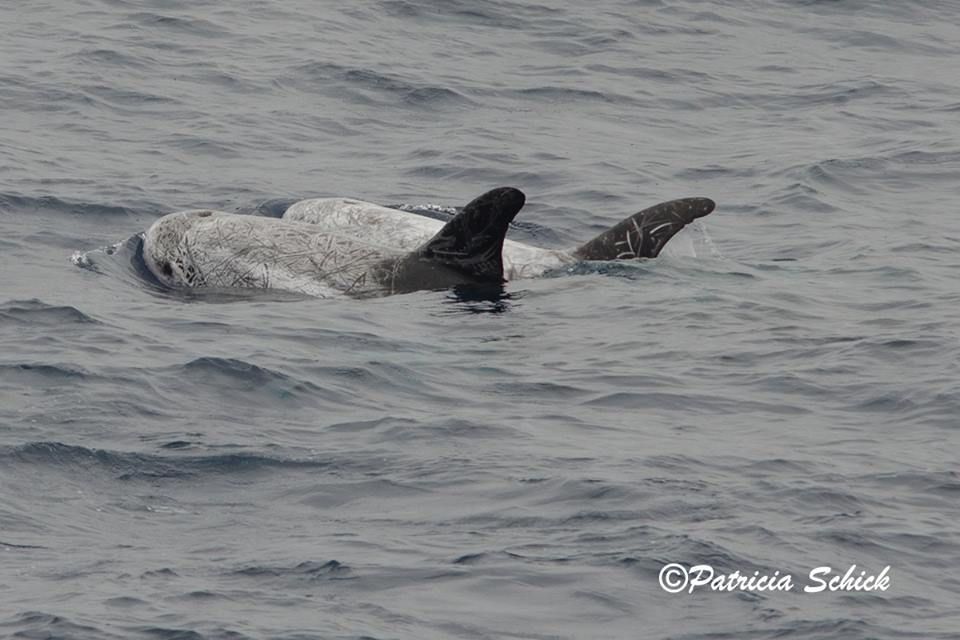 Risso’s Dolphins (Grampus griseus)
We finished our 2017 Summer Whale Watching season with an appearance of rarely-spotted Risso’s Dolphins. Whale watch naturalists aboard the cruise mentioned that they only see these unusual dolphins about once a year. Spotting this species was an extra-special way to end the season!

Captain Rick found the pod of about 25 to 30 Risso’s dolphins in deeper offshore waters, which is their typical habitat. We noticed their tall, sickle-shaped dorsal fins first as they slowly milled around together at the surface. We could easily see the aquamarine glow of the white adults just beneath the surface. While Risso’s calves are born light gray, adult Risso’s dolphins are nearly all white. This white coloration is mainly due to scars and scratches from teeth-raking by other dolphins. Additionally, the dolphins are also scarred with bite marks from the beaks of their squid prey and from parasitic cookie cutter sharks and lampreys.

Like other dolphins (Family Delphinidae), Risso’s Dolphins are a type of toothed whale. They reach lengths of about 10 to 13 feet (3–4 meters) — relatively large for a dolphin. A few unusual features of this species include the rounded melon (forehead) with a crease down its center and the indistinct beak. These social animals live in pods of 3 to 30 individuals. Occasionally, they gather in super-pods of a few hundred to thousands of individuals. Risso’s dolphins can be active and acrobatic — often spyhopping, breaching, flipper-slapping and fluke-slapping. Although most dives are last just a few minutes, Risso’s Dolphins can dive for more than 30 minutes and to depths of at least 1,000 feet (300 meters) in search of squid.

Because of their deep water prey and habitat, we rarely see Risso’s Dolphins during our Whale Watching cruises. We were incredibly fortunate to spend about 30 minutes with this remarkable marina mammal!