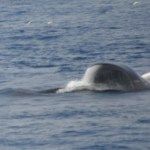 SD Natural History Museum Whalers and whale watching regulars like Mike Roerder (author of 1000 Whales in a Year) are out on cruises enough to spot reoccurring animals. The “regulars” have spotted and photographed a mottled bottle nose dolphin and named him patches for obvious reasons! Diane Cullins wrote: “Went out on the Hornblower Adventure this morning…was so happy to see ‘Patches,’ the piebald bottlenose dolphin again…definitely one of a kind! Offshore bottlenose dolphins are always a treat to see, as was the Minke whale, the smallest of the baleen whales we see off San Diego.”

I asked Mike Roeder about Patches because he has been on board Hornblower hundreds of times in doing research for his book One Thousand Whales in a Year. He said Patches’ “piebald” looks makes her a bit of a dolphin celebrity! He pulled this from wikipedia:
A piebald animal is one that has a spotting pattern of large unpigmented, usually white, areas of hair, feathers, or scales and normally pigmented patches, generally black. The colour of the animal’s skin underneath its coat is also pigmented under the dark patches and unpigmented under the white patches. This alternating colour pattern is irregular and asymmetrical. Animals reported with this pattern may include horses, dogs, birds, cats, pigs, and cattle, as well as snakes such as the ball python. Some animals also exhibit colouration of the irises of the eye that match the surrounding skin (blue eyes for pink skin, brown for dark). The underlying genetic cause is related to a condition known as leucism.

Leucism is a general term for defects in pigment cell differentiation and/or migration from the neural crest to skin, hair, or feathers during development. This results in patches of body surface (if only a subset are defective) lacking cells capable of making pigment. Leucism can cause a reduction in all types of pigment, in contrast to albinism, for which leucism is often mistaken. Albinism results in the reduction of melanin production only. More common than a complete absence of pigment cells is localized or incomplete hypopigmentation, resulting in irregular patches of white on an animal that otherwise has normal colouring and patterning. This partial leucism is known as a “pied” or “piebald” effect; and the ratio of white to normal-coloured skin can vary considerably not only between generations, but between different offspring from the same parents, and even between members of the same litter. A further difference between albinism and leucism is in eye colour. Due to the lack of melanin production in both the retina and iris, albinos typically have red eyes. In contrast, most leucistic animals have normally coloured eyes. The cells in the eyes have an independent genetic origin, and they are typically unaffected by the genetic cause of leucism.

But I digress…As a consequence of her insecurity, Patches roams up and down the West Coast. Since “coming of age about 4-5 years ago, she has been seen in the company of both bottlenose AND (heaven forbid) common dolphin pods from San Diego to Santa Barbara. So she is thought to be a good communicator with all kinds of animals … and (like J.Lo) she loves to show off her backside.

According to the authoritative One Thousand Whales in a Year, Patches was first seen in 2013 off La Jolla on Aug 17th, 2013, then again on the 19th (page 60). She was with common dolphins.

At that time it was speculated that there were several like her and they had been seen around the West Coast. Or that her mother was “common” and her father “bottlenose”. Those are unfounded rumors. Since then, Diane Cullins (whaler) has forwarded photos of patches to an expert marine biologist friend who said that she is a unique specimen and all sighting are of her.

Until the trip when the previously-shared photos were taken, Captain Bill from Hornblower Cruises & Events, San Diego, had only heard of her, but never seen her. Now he knows what we were always going on about.We next saw Patches on Oct 16th and 17th in a group of 100 bottlenose dolphins. She reappeared Oct 27th, Nov 3rd and Nov 9th with a similar sized group of bottlenose. Perhaps also in January 2014, but my records are incomplete…

Since she has apparently become a star, she’s become a bit elusive, but this week the paparazzi spotted her out cruising with her pals:

Mike Roeder, One Thousand Whales in a Year Author.