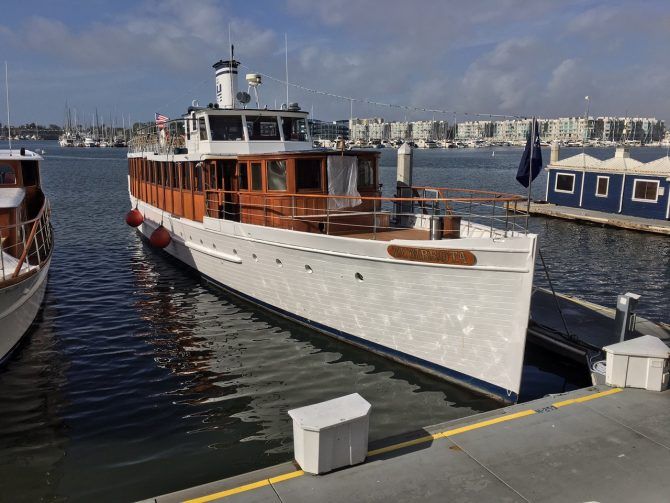 THE SHOW MUST GO ON

The Greatest Show on Earth came to an end this past weekend as The Ringling Bros. Circus pulled down its tent for the last time. The show may be over for the circus but a part of their history is still alive and well at Hornblower Cruises & Events. Charles Ringling’s former yacht Zumbrota is very much in demand in Marina del Rey.

Today, the 103 ft. yacht is docked at Fisherman’s Village in The Marina but it was originally built for Charles Ringling in 1918. The 96-ton vessel was acquired as a party boat for the fourth youngest of the seven Ringling brothers. It was long believed that Charles Ringling named the boat after Zumbro, one of the Ringling circus elephants. But it’s a story in legend only. It was actually named after Zumbro Falls in Minnesota, where the Ringling family often vacationed.

Charles Ringling moored Zumbrota in Tampa, FL where it stayed for three years. After which N.J. Smith of Miami then purchased the yacht and renamed it Vellron. He relocated the newly named boat to Miami where Smith and his family used the craft to cruise the eastern coastline. Then in 1924, it took a much longer trip completing the 6,000 mile journey to the west coast of California where Smith sold it to a lumberman named E.C. Finkbine. Finkbine and his son moored the boat in Los Angeles for the next 12 years before it changed hands yet again, this time to another man named Smith, initials C.S., the former mayor of Compton.

But when WWII broke out, the navy commandeered Vellron to deliver mail between Los Angeles and San Francisco. They gave it new engines and a new lick of paint for its wartime role. After serving its call of duty as a water mailman, the navy returned Vellron to C.S. Smith and under his ownership it was used, amongst other things, as a charter vessel to Catalina Island.

It was around this time that Hollywood came calling. Vellron became a pleasure yacht once again for the rich and famous as legendary Hollywood icons W.C. Fields, Mae West and Douglas Fairbanks all partied onboard. If walls could talk, Zumbrota could tell many glamorous and probably notorious tales.

In 1958, and still named Vellron, she was acquired by Capt. Jack Kirk who chartered her on albacore fishing excursions sailing out of San Pedro. Now 50 years old, she was showing signs of wear and tear but still going strong. Her journey certainly wasn’t over.

Dwight D. Ivy purchased it from Capt. Kirk for $20,000. Mr. Ivy restored the vessel and relocated it to the Columbia River area where he actually raised one of his children while living onboard. The vessel did a wide variety of work from carrying both passengers and cargo, and once was a pilot boat for ships transiting the Columbia River.

That’s where the story and the journey might have ended but it was merely just another twist in this boat’s remarkable tale. In 1974, Sally Reichenbach, a businesswoman from Burbank, took a fancy to the boat and decided it needed some TLC. She spent $25,000 to make it “A happy boat again.” Under her tenure, Zumbrota was often used for whale watching tours.

A 1982 Spokane, WA news article provided yet another change of direction and location for Zumbrota. She was being operated out of Anacortes and Bellingham, WA, by Lavina Longstaff as an excursion vessel.

It was 1985 when Zumbrota eventually joined the fleet at Hornblower Cruises & Events. She was rebuilt and refurbished. Today, Charles Ringling’s former party yacht is now back doing what she was originally intended to do – hosting memorable, fun-filled events on the water. With its gleaming teak decks, shiny brass fittings, new window seats and updated full-service galley, Zumbrota can comfortably host 125 guests.

“I’m in awe of this boat whenever I’m behind the wheel,” says Capt. Chuck Myers who has captained Zumbrota on numerous occasions for Hornblower Cruises & Events. “It’s in great condition yet she’s nearly 100 years old. It looks fantastic. When I think of everyone who has steered this wonderful vessel over the years. The history…it’s amazing.”

Now on National Register of Historic Places, Zumbrota is one of the most historic yachts sailing in Marina del Rey. In 2018, she will be a grand old lady at 100 years old – and still going strong.