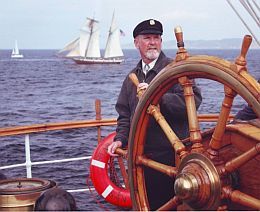 Captain Rich Goben, of the San Diego port, has been nominated for the Old Pulteney Maritime Heroes Award. Nominated by friend and colleague Chris Gallup, Captain Rich exemplifies the spirit of sailing and maritime recognized by this national award.

Old Pulteney Single Malt Scotch Whisky and US Sailing have selected Captain Rich as one of three finalists for this year’s award. The award recognizes men and women who have made significant contributions to the advancement of sailing through education, volunteering, advocacy and encouraging sailing within their communities.

As Chris explains in his nomination:
Captain Goben exemplifies the spirit of the Maritime world in his support of Mariners and the Marine industry, in and out of the workplace…. He was the first recipient of the Roger Murphy National Safety Award from the Passenger Vessel Association. And, he was the first known Mariner to be given the “Hospitality Employee of the Year” award by the San Diego Hotel/Motel Association. Captain Rich Goben believes in training and preparedness in all facets of his maritime sailing career.

From training to safety, Captain Rich as made a life of giving back to the community he loves. He started as a volunteer at the Naval Sailing Club in San Diego in 1975. Since then he’s written several articles on safety for industry magazines, as well as working with several sailing vessels to teach, train and mentor their crews. He served on Dennis Conner’s America’s Cup team as the “B” Team Navigator from 1982-1983. From 1984 to 1998, he crewed on the Star of India, the world’s oldest active sailing ship at the Maritime Museum of San Diego, and became the Master of the ship in 1998.

He has been honored several times before: