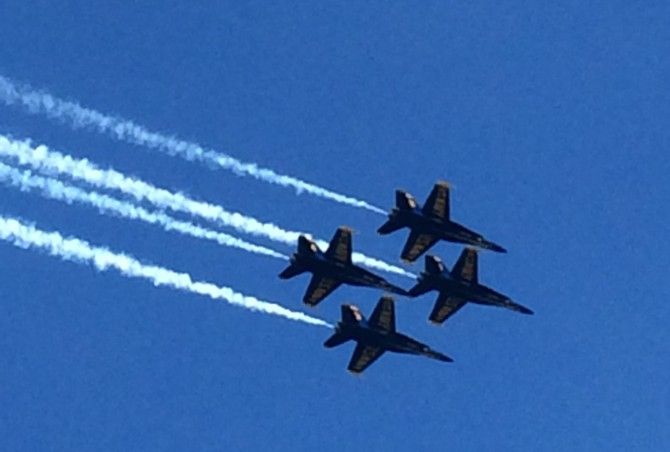 Fleet Week in San Francisco came back this year and what a weekend!

San Francisco Fleet Week weekend kicked off with the commissioning of the U.S. Navy’s newest addition to the Pacific Fleet, the America.

The assault ship, docked at Pier 30-32 for the ceremony, officially entered service Saturday in a ceremony featuring centuries-old naval traditions and a modern-day flyover by tilt-rotor Osprey aircraft.

“We wanted another America,” said Eloy Heras, 71, a digital electronics technician on the previous America, who was proud of his service on her and lobbied for another ship to carry to country’s name. “It meant something, it really did.”

The event was among several across the waterfront to celebrate the return of Fleet Week to San Francisco, after last year’s cancellation due to the federal sequestration of funding.

The year off did not seem to diminish enthusiasm for the event as shoulder-to-shoulder crowds shuffled along the Embarcadero before the afternoon airshow, featuring the Blue Angels precision flight team.

With the USS America officially ready for battle, the crowds turned their attention to boarding the San Francisco Belle for a tour around San Francisco Bay and to get a first hand account of the airshow from the water.

Guests exclaimed in amazement with a ton of “Oohs and Ahhs” as it felt the show was centered around our boat with numerous flyovers and even better views than we all had ever seen.

Throughout Fleet Week in San Francisco, thousands of bay area visitors and locals climbed aboard aircraft carriers, destroyers and cruisers docked along the Embarcadero to get a glimpse into the day-to-day lives of the sailors serving in the U.S. Navy and Coast Guard.

It was a time to celebrate our servicemen and really have a patriotic tribute to our country and all that we stand for.

“Fleet Week is great for us,” said Rafael Porras, Red’s manager, adding the Blue Angels and red, white and blue patriotism are good for business. “Fleet Week and baseball — they generate a lot of money.”

Next year don’t miss out on a sold out chance to view this amazing weekend aboard a yacht with a delicious meal, flowing drinks and the legendary Blue Angels.