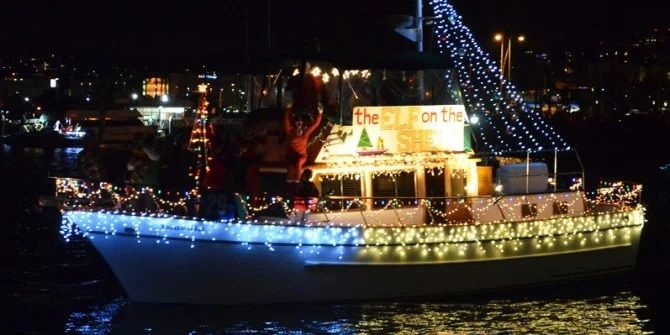 Southern California’s Holiday Season is All Decked Out

The holiday season is lit up with a variety of annual boat parades in Newport Beach, San Diego and Marina del Rey, making these Southern California destinations even more majestic during this spirited time of year. Each port celebrates with their own sense of style and history.

Celebrating its 107th year, the Newport Beach Parade of Lights is an extraordinary display of illumination and is the nation’s longest running, lighted holiday boat parade.

For five nights, from December 16th-20th, a million viewers will witness the beautifully decorated yachts, boats, kayaks and canoes as they sail along the harbor. Hosted by the Commodores Club of the Newport Beach Chamber of Commerce, this year’s theme is “Seas the Holidays.”

As is tradition, boats will light up the harbor as a dazzling array of holiday lights and music entertain the crowd. Many of the boats will be richly decorated with animated Christmas scenes and accompanied by music and costumed carolers. In years past, some boat owners have spent over $50,000 to decorate their vessels for the event.

Hailed as “one of the top ten holiday happenings in the nation,” by the New York Times, the Parade of Lights route will wind through 14 miles of the harbor to give viewers in restaurants, yacht clubs, public beaches and private homes, an incredible sight that has delighted millions of people for a century.

The parade starts off from Bay Island at 6:30 pm and finishes at the same site at approximately 9:00pm each evening. As the Newport Beach Christmas Boat Parade moves its way through the Newport Harbor, you can view the parade from almost anywhere on shore, free of cost.

In addition to the nightly parade, beautifully decorated bayside homes and businesses surrounding the harbor go “all out” with their own holiday spirit, featuring everything from roof-top animated scenes to dancing Christmas trees. With its own judged categories and prizes awarded, the “Ring of Lights” has become as celebrated as the boat parade itself.

For those who want to enjoy the festivities from the water, Hornblower Cruises & Events offers public cruises.

Continuing its long-standing tradition, the 44th annual San Diego Bay Parade of Lights promises to amaze and entertain bayfront crowds during the evenings of December 13th and 20th. Participants in this year’s highly anticipated holiday boat parade will adorn their boats to fit this year’s theme, “Christmas Around the World.”

Presented by the Port of San Diego, the San Diego Bay Parade of Lights brings more than 100,000 San Diego residents and visitors to the shores of the San Diego Bay annually. The procession of approximately 80 lavishly decorated boats has become one of the most iconic events in the region.

Beginning at 5:30pm each night, the parade begins at Shelter Island and proceeds to Harbor Island, the Embarcadero, Seaport Village and ends at the Ferry Landing in Coronado. The parade takes about two hours to pass any given point and there are many comfortable waterfront viewpoints along the route.

Additionally, for those who want to cozy up on a festive dinner cruise, Hornblower Cruises & Events offers a Parade of Lights Dinner Buffet Cruise. Boarding begins at 5pm with cruising past the parade from 5:30-8:30pm.

The Marina del Rey Holiday Boat Parade is now in its 52nd year and this year’s Grand Marshall is none other than one of America’s most beloved “moms,” Florence Henderson of Brady Bunch fame.

Scheduled for Saturday, December 12th, there are many locals and visitors alike that turn out for this time-honored tradition, but very few remember the first boat parade in Marina del Rey. When the first boat parade circled the Marina’s main basin in 1963, there were approximately 100 boats in the Marina and almost no buildings. Twenty of those one hundred boats entered the parade.

Margie and Steve Bragg were among the original one hundred Marina del Rey boat owners who formed the Pioneer Skippers Boat Owners Association. They, and the other charter members, decided to have a boat parade because there was no other water-based festivities at the time. It’s been said that prior to the boat parade, nobody wanted to come to the marina. As a matter of fact, the marina had only a few docks at the time and no breakwater, so the waves came roaring into the unprotected harbor.

During the inception of the boat parade, people like the Braggs would walk the docks to get parade entries and nominal donations so that the costs would be covered with a mere $50-$60. Back in the day, the group assembled a raft so that the centerpiece floating Christmas tree could stand tall in the middle of the main basin. Although that tradition was lost, the marina grew from 100 to nearly 6,000 boats and in 1964, a detached breakwater was built to solve the surge problems.

Though the Braggs moved away several years ago there are still many marina boat owners who have lighted and decorated their boats for the Marina del Rey boat parades through the years.

Along with newcomers, who come to watch the parade for the first time, there are many boat owners and crew who have perpetuated the salute to the holidays with Marina del Rey’s annual Holiday Boat Parade.

In addition to the iconic parade, from 6-8pm, the evening’s festivities take flight with a fireworks display at 5:55pm. There will also be a Winter Wonderland from 2-5:30pm and food trucks in Burton Chase Park as well. For many, the park is one of the most popular outdoor viewing locations in order to hear the music and commentary, but for those that want to cozy up, stake a spot at one of the neighboring restaurants at Fisherman’s Village.