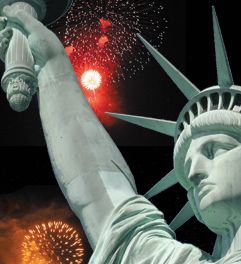 Statue of Liberty Tickets Back on Sale: Re-Opening July 4th

Tickets are now available for Statue Cruises! After a six-month hiatus, the grand re-opening of the Statue of Liberty and Ellis Island is scheduled for July 4, 2013 and there is no better day to celebrate.

Lady Liberty has been closed since October 29th when Superstorm Sandy caused major devastation to the region. Luckily, the Statue of Liberty did not sustain any structural damage. The museum collection within Ellis Island did endure minor damages but the building is undergoing repairs to the infrastructure in anticipation of the re-opening.

We couldn’t be happier for America’s greatest landmark and the city of New York! You can book your reservation with Statue Cruises today at http://www.statuecruises.com/..