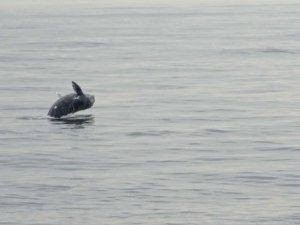 Michael Roeder and Scotty Schmidt have been aboard Hornblower’s Whale Watching Cruises more often than some of the actual Hornblower Captains! Why? Michael and Scotty just finished a book called “1000 Whales in a Year”. The book is for sale on Hornblower’s Whale Watching Cruises and on almost any given day you can get an autograph from the authors Mike and Scotty and even a photo with the pair of dedicated whale enthusiasts. The book’s goal was to to find one thousand whales in one year on the Pacific Ocean near San Diego. However there is so much more that inspired the book: a band of kindred spirits, people with a common bond(whales in the wild) and each in need of a little special healing.

Mike says: I’d recently retired and being a bit reclusive anyway, was looking for something social not too threatening. Kim and Dennis invite us on a whale watching cruise, my wife and I bought a season pass on Hornblower, we met Scotty and we joined the gang.* “…our motivation for spending all this time on the water in one year. After some calculations, we found we had spent an average of one hour per whale. Yes its obsessive behavior, we know. We are obsessive people. Whale watching is addictive and if you have an additive personality type you may be drawn in too. We never intended to spend 1000 hours watching, see 1000 whales or write this 100 page book- these evolved as our relationships with each other and the whales, grew.” Michael Roeder

Kim says: We are enthusiastic boaters, with extensive sailing experience as well as having worked with the US Navy and US Coast Guard Auxiliary. We’ve spent lots of time near or on the water. When we first started whale watching in February 2013, we saw it as just another opportunity to be on the water. We were also looking for some peace and quiet after the loss of a service member in our family. Seeing these majestic whales so close to our shore had an unbelievable positive impact to our life. We met Scotty on the Hornblower and found a kindred soul. The whales pulled us up to the rail, brought us out of ourselves and together as friends on a common quest. Kim and Dennis Usrey.

The book also has an electronic version on the Apple iBook store in case you’d like to get your hands on this gem. Visit their website..

* Yes you too can “join the gang”. Purchase a season whale watching pass, for unlimited whale watching cruises during the Gray Whale Watching season from Dec. to April. We look forward to seeing you onboard too!