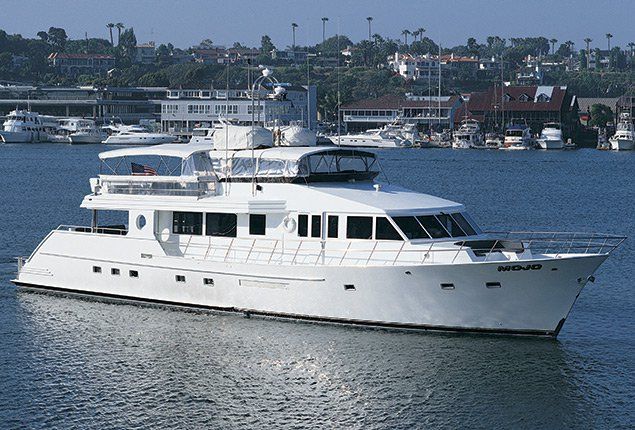 The Mojo, One Of The Most Interesting Yachts in the World

The Mojo is one of the most interesting yachts in the world. In 1969 the 100-foot, custom-designed Ditmar Donaldson motor yacht was built for intimate events. Her facilities and features make her a popular choice for celebrations, weddings, commitment ceremonies, as well as corporate retreats and team-building excursions.

The Mojo is a yacht with many special memories and experiences for lots of people. But did you know that she has had A-listers aboard? Such as Brad Pitt, Jennifer Aniston, Ben Stiller and the Band 311! Even the legend Michael Jackson himself was on the Mojo for the scattering of Barry White’s ashes. (Picture of Michael Jackson aboard the Mojo below)

The Mojo is also no newbie to the limelight. There have been film crews on every inch of this yacht for Timberland and Magoo’s music video. She has also starred in quite a few TV shows like Bay Watch, VIP, Colombo, and The Bachelor!

Tons of celebrities have been on this yacht, there is no doubt about that. But what would you think if I told you that the Mojo had someone even more prominent aboard, try President Richard Nixon.

Nixon used the Mojo over two dozen times for personal events. He said, “Some liked the sea, some liked the mountains, some liked to fish, hunt, and as far as I am concerned, of course, I don’t happen to fish or to hunt, but I like the water and I like the ocean, and this is a great opportunity to see it at its best.” (Below Nixon is pictured on the back of the Mojo)

Last but not least the Mojo is a survivor. On January 28, 1978 she battled a 20-foot stormy sea against Coast Guard and Harbor Patrol advice. There was $85,000 worth of damage, but she was brought back in, cleaned up, fixed up, and now better than ever. (Pictured below is the huge wave taking over the Mojo)

The Mojo is one of the most interesting yachts in the world. Not because of the people that have been aboard, but because of the memories and experiences that she has created for so many people!