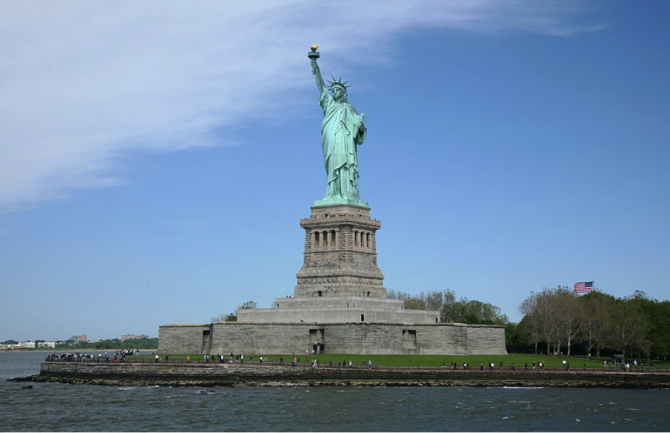 The Statue of Liberty is a monumental piece of art that signifies our country’s freedom. It sends chills down spines of around four million people each year who travel to New York to stare up at its unique beauty and magnificent structure. Some people even venture up the three hundred and fifty-four stairs to climb their way into her crown. From two hundred and sixty-five feet up inside her crown there are breathtaking views of the Manhattan skyline. Between the history and sheer awe that the Statue of Liberty brings to people this is one of the most beloved national landmarks in the United States.

Frederic Auguste Bartholdi created the statue with the help of Gustave Eiffel. Bartholdi put a lot of thought into the structure of the Statue of Liberty. He based the face off of his own mother, and put seven points on her crown to signify the seven continents of the world. It was supposed to be finished in time for the 100th anniversary of the Declaration of Independence, but there was an issue with funding. The statue overall cost around $250,000, and multiple fundraisers and auctions were held to help pay for it. After lots of hard work the Statue of Liberty was finally completed in Paris, and then shipped off to the United States.

On June 17, 1885 the Statue of Liberty arrived in New York in three hundred and fifty separate pieces inside two hundred boxes. The 450,000-pound statue made up of copper and iron was carefully rebuilt on Bedloe Island. This was a gift of friendship from France to the United States to acknowledge the American Revolution, but took on the symbol of the United State’s democracy to the world. It’s copper finish quickly faded into a greenish color, but the people admiration for the statue only seemed to grow.

Bartholdi always wanted the statue to be placed on Bedloe Island because when he came into America through the New York Harbor he noticed that all ships would have to sail by it. Lady Liberty just like Bartholdi hoped was quickly known for watching over Ellis Island. She saw the twelve million immigrants who entered the United States through New York. For the immigrants she was one of the first things they could see when entering America, the symbol of freedom. This gave them hope to achieve the American Dream that they traveled so far in hopes to achieve.

Today the Statue of Liberty still stands as a symbol of hope and freedom in the United States. She is a majestic statue that millions of people have travelled across the globe to marvel at. Her head still held high, and her torch burning bright she will always be a part of American history.

Next time your in New York City, be sure to check out both the Statue of Statue of Liberty and Ellis Island. Book here!