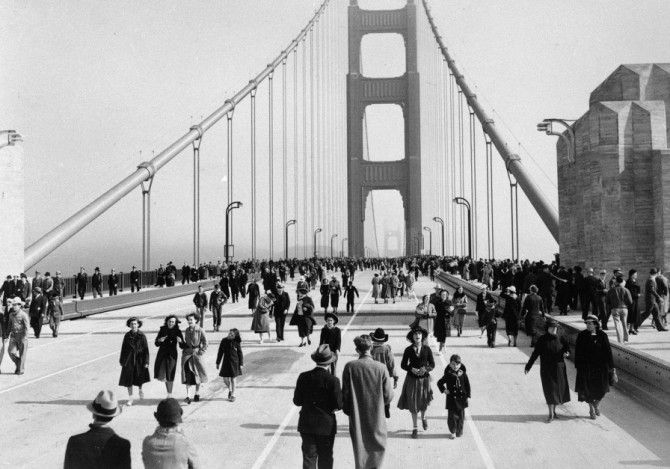 Before the bridge — Fort Point in the foreground, looking across the Golden gate (the strait connecting San Francisco Bay to the Pacific Ocean), toward Marin County to the north, in 1910. (National Park Service)

The Golden Gate Bridge, a stunning technological and artistic achievement, opens to the public after five years of construction. On opening day–“Pedestrian Day”–some 200,000 bridge walkers marveled at the 4,200-foot-long suspension bridge, which spans the Golden Gate Strait at the entrance to San Francisco Bay and connects San Francisco and Marin County.

On May 28, the Golden Gate Bridge opened to vehicular traffic. The concept of bridging the nearly mile-wide Golden Gate Strait was proposed as early as 1872, but it was not until the early 1920’s that public opinion in San Francisco began to favor such an undertaking.

In 1921, Cincinnati-born bridge engineer Joseph Strauss submitted a preliminary proposal: a combination suspension-cantilever that could be built for $27 million. Although unsightly compared with the final result, his design was affordable, and Strauss became the recognized leader of the effort to bridge the Golden Gate Strait. During the next few years, Strauss’ design evolved rapidly, thanks to the contributions of consulting engineer Leon S. Moisseiff, architect Irving F. Morrow, and others. Moisseiff’s concept of a simple suspension bridge was accepted by Strauss, and Morrow, along with his wife, Gertrude, developed the Golden Gate Bridge’s elegant Art Deco design. Morrow would later help choose the bridge’s trademark color: “international orange,” a brilliant vermilion color that resists rust and fading and suits the natural beauty of San Francisco and its picturesque sunsets.

Construction underway on a pylon on the south shore of the Golden Gate Bridge project, ca 1933. (Library of Congress)

In 1929, Strauss was selected as chief engineer. Construction began on January 5, 1933, at the height of the Great Depression. Strauss and his workers overcame many difficulties: strong tides, frequent storms and fogs, and the problem of blasting rock 65 feet below the water to plant earthquake-proof foundations. Eleven men died during construction.

Opening day — the Golden Gate Bridge was opened to pedestrians on May 27, 1937. The next day it officially opened to vehicular traffic. (AP Photo/Redwood Empire Association)