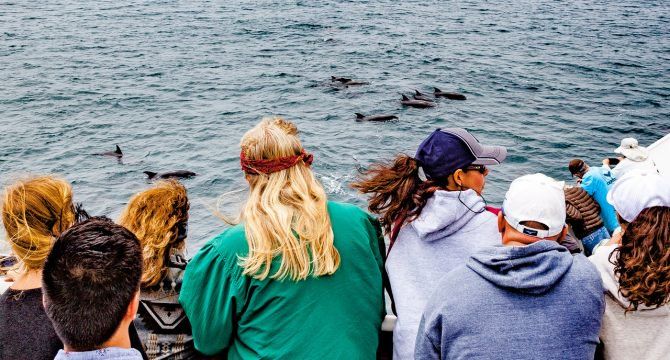 The last day of June was the first day of Hornblower Cruises & Events blue whale watching season in San Diego and what a spectacular start to the season. Like a Broadway show on opening night, it was a star-studded marine cast who put on a stellar display. In fact, watching the enthusiastic crowd onboard Adventure Hornblower was almost as entertaining. As we sailed out of San Diego Bay towards the open ocean, I sat with whale expert and volunteer, Marilyn Smith, who gave me an informal and informative lesson on the variety of marine life we might come across. I was prepped and primed.

It wasn’t long before eagle-eyed Captain Julie Peet was the first to spot the blue whales coming up for air with their distinctive blowholes shooting water spouts into the air. There must have been an abundance of krill in the water as the blue whales were gathering in numbers now. Remarkably, the average blue whale can consume 40 million krill per day.

As the blues dived again there was a hushed silence in anticipation of their resurfacing. Capt. Jules cut the engines and Admiral Hornblower sat silently in the ocean. All was calm and you could’ve heard a pin drop amongst the 100 or so whale watchers. Blue whales come up for air roughly between 12-15 minutes so we were all waiting and looking anxiously every which way for more sightings.

Suddenly, a whale spout was spotted, then another, then another. At one point five whale spouts were spotted simultaneously. It was a rare sight indeed, according to the seasoned whale watchers. There were squeals of delight all around the top deck.

We were so close to what are the largest living creatures on our planet, that we could hear the whales breathing as they came up for air. As they descended again, several whale flukes were spotted which gave added delight to the watchers.

As the blues continued on their krill diving journey through the water, the second act appeared in the distance and headed straight towards us. It was a large pod of Bottlenose dolphins leaping out of the water at speed. They were all soon upon us and began an acrobatic routine of flying twists and turns as if each dolphin was trying to out-perform the other. It was like an aquatic Cirque du Soleil. The whale watching crowd was now a dolphin watching crowd and our gasps of wonder were palpable.

The Bottlenose performance lasted a good fifteen minutes before they all swam off together, leaping through the ocean. Our adventure was almost over. As Capt. Jules was about to steer Adventure Hornblower for home, we were in for another delight. A bright, light blue creature seemed to be floating very close to our boat. It was a Mola Mola, also known as an Ocean Sunfish. It was a strange creature, which appears to be all head and very little body. It drifted beside us for its close-up and the keen photographers onboard clicked away, recording its appearance for prosperity.

Amongst the whale watchers, the general consensus was that this had been a remarkable day, especially as it was also the first day of the season. We docked back at port and everyone gave Capt. Jules a very well deserved round of applause. Her uncanny ability to spot the signs of oceanic activity before anyone else, made it both a learning, and unforgettable, experience. And the whale watchers all certainly got what they came for. It all portends to a great whale watching season this summer.