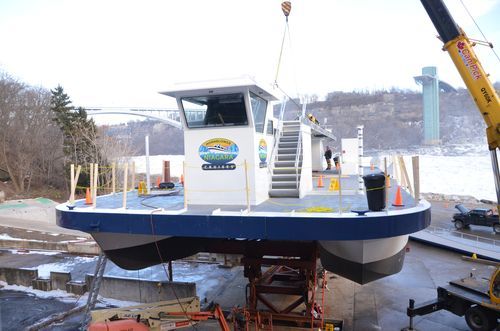 We have arrived in Niagara Falls, ON!

We are so excited to finally bring you an update of our project in Niagara Falls, Canada that will launch this Spring. We have been working hard to bring cruise aficionados another experience to add to their bucket lists and despite harsh weather conditions, we’re on track with construction of our new catamarans.

Our humble (and fearless) leader, Terry MacRae, said it best. “While battling record cold temperatures, high winds and blizzard-like conditions, our assembly crew has risen above, constructing catamaran one right on schedule…The catamarans are truly state of the art vessels that will allow Hornblower Niagara Cruises to offer several unique tour options to showcase the majesty and power of the Falls for millions of visitors.” Watch more here: http://bit.ly/1fnCfKj

The catamarans hold 700 people and were constructed in Wheatley, Ontario, by Hike Metal, a marine construction company. Once constructed, each catamaran was then taken apart in three sections and transported hundreds of kilometers to our docks in Niagara Falls. Our team of highly skilled marine engineers has reassembled the three sections of the first catamaran and is on schedule to complete the assembly of the second by mid to end of February.

We hosted the press and media that arrived in Niagara Falls, Canada to get a first look at the new catamarans. They were given an up close look at the catamarans first hand with an exclusive tour on the vessels.

With only two months until warmer weather, track our progress at: http://www.niagaracruises.com/