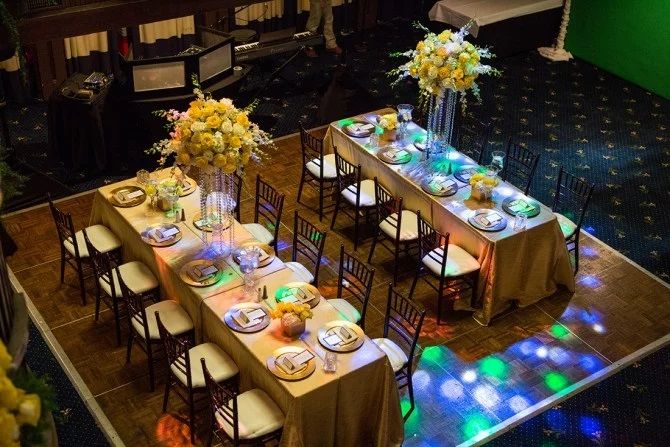 Wedding Series 2: Part I – When Anyplace Won’t Do

Drue and Dean are a couple who thrive off of creativity, so it only makes sense that they chose a wedding venue that is steeped in history and character rather than another bland ballroom. As the brainchild of the master architect Norman Foote Marsh, the Park Place Methodist Church was built in 1910. This Spanish Colonial Revival boasts awe-inspiring stained glass windows, vaulted ceilings, rich redwood millwork and a statue of the angel Gabriel blowing his horn. In 1984, the church transformed into “The Abbey,” and in 2014 the venue was the site of Dean and Drue’s wedding. Choosing the venue was easy for the couple. “The Abbey provided the uniqueness we sought,” says Drue. “It was sturdy, not frilly. As a historic building, it was unlike any routine hotel banquet hall.” The couple’s event planning background and Hornblower wedding coordinator used The Abbey as their canvas to create a wedding that embodied the couple’s personality.

A Gem in San Diego
The Abbey is San Diego’s only remaining Classic Revival landmark.

The Golden Statue
A gold-leafed statue of the Archangel Gabriel sits proudly on top of The Abbey. Though it is difficult to judge from the photo, the angel is roughly seven feet tall.

What a Way to Say “I Do”
Standing at the pulpit of the Abbey makes you feel like you have gone back in time to the Renaissance. The expansive domed glass skylights shine a pale yellow glow that bathes the lovely couple as they say their vows.

Everyone Gets a View
Guests of Drue and Dean’s wedding were able to see the couple from all vantage points during the ceremony. The Abbey’s unique circular shape allowed perfect viewing for the exciting affair.

All About the Centerpieces
“From a décor perspective, The Abbey provided the most unique foundation for the floral design that we envisioned,” says Drue.

As the backdrop on one of the most important days in Drue and Dean’s lives, The Abbey lent its exquisite décor, gilded historical context and romantic ambiance.

The venue or setting for a wedding is like the main guest—it brings its own bold personality to the day. The Abbey’s elegance, strength, delicateness and beauty played a large part in the story of this wedding and a new chapter in their lives. “For our families and close friends, marriage equality had brought a great deal of support and profound pent-up excitement for our potential wedding,” says Drue.